Published by StringOvation Team on November 21, 2019 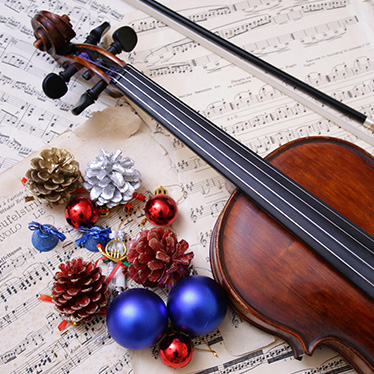 The holiday season is  a special time for making and sharing music. Often it is the first experience young string musicians have with playing in public or performing in front of others.

Between growth in musicianship and greater playing experience, it’s natural to want to add to your holiday song repertoire, preserving some of the favorites and adding new billboard hits to the roster.

Don’t forget that embellishment and improvisation are tenets of playing at the intermediate and advanced levels. If you view or download a piece of music that’s “too easy,” that’s your chance to put advanced creative, compositional skills to use, adapting the score to fit your playing level.

The “Jo Bros” released some new music this Christmas, and their popular single, “Like it’s Christmas” is available to download from musicnote.com. This version is paired with a piano score, and while the standard version is written in G♭Major (very playable for any violinist), you have the option to transpose it into other key signatures to match your comfort zone or your fellow vocalist’s preferred range.

“Make it to Christmas” (Alessia Cara)

Here’s another new release getting positive attention from music reviewers. We recommend getting some of your viola, bass, and cello friends together and using this score as part of a quartet or chamber-style group. Learning to play in a small ensemble makes a bigger busking impact, and can be a great way to earn surprising amounts of holiday cash.

Merry Christmas Darling was originally a holiday hit released by The Carpenters in the late 70s. This year, Brandy Clark (featuring Charlie Worsham) has put a country twist on that old favorite, and you can do the same by using the original sheet music and adding a fiddle-style twang and lilt to your style. Listen to Brandy’s version.

Interestingly enough, some of the most popular holiday songs listed on billboard.com’s 2019 holiday music list are more like “oldies.” Here are a few of our favorites in that category.

This song has remained a popular holiday favorite since George Michael released it back in 1984. We suspect it will be a 2019 re-hit, because it’s featured in a new holiday film starring Emilia Clarke and Henry Golding, along with some other Wham! and George Michael blasts-from-the-past.

That reminds us – if you love streaming movies, don’t forget to check out these, Top 6 Movies About Classical Musicians for Holiday Enjoyment, while you’re lounging around over the Thanksgiving or Holiday breaks.

“If it Be Your Will” (HAIM, via Leonard Coen)

The popular band, HAIM, is releasing a cover of Leonard Coen’s, If it Be Your Will, on a new, holiday album release titled, Hanukkah+. In addition to being an incredible song, the new album is also a fantastic gift list idea for Jewish friends and family. The release is scheduled for November 22, 2019, so search online to hear HAIM’s all-star rendition of a classic.

Now we’ll switch from the contemporary to the more traditional holiday songs that everyone knows and loves.

Many of them were covered in our previous post, such as:

You can add a few more to your traditional carols and song list, including:

It’s a quick countdown into the official holiday season, so have fun practicing and perfecting some of these 2019 best holiday songs for the violin.

Check out our original list of violin holiday songs here.