Published by StringOvation Team on August 01, 2017 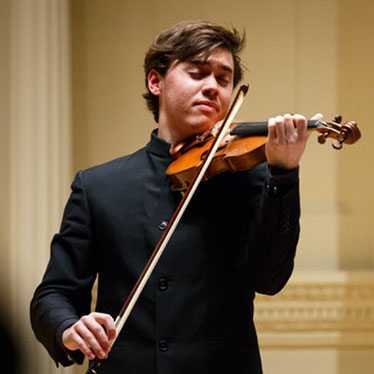 While still only in his twenties, violinist Benjamin Beilman has created quite a name for himself. His debut album, Spectrum, came out in March 2016, although he earlier performed Prokofiev’s complete sonata for violin for a recording in 2011. The New York Times describes his ascent: “Mr. Beilman’s handsome technique, burnished sound and quiet confidence…showed why he has come so far so fast.”

Benjamin was first introduced to the violin by attending his older sister’s lessons. Their mother would take him along and they’d sit and listen while his sister played. Benjamin said he would hum the music he heard at her lessons and when he was five years old, asked to have his own violin lessons.

He has since studied at the Music Institute of Chicago with Almita and Roland Vamos, at the Curtis Institute of Music with Ida Kavafian and Pamela Frank, and at the Kronberg Academy with Christian Tetzlaff.

Winning his way to a career

The American violinist took First Prize in the 2010 Montréal International Musical Competition, performing the Sibelius violin concerto. He credits that win as his “big break.” He followed up that win with concerts throughout Canada and a bronze medal at the Eighth Quadrennial International Violin Competition of Indianapolis (2010). From there, he auditioned for Young Concert Artists, which kept him booked for years afterwards. Benjamin has also been awarded

As his career and renown has grown, Benjamin has performed with the:

And at such venues include Alice Tully Hall, Wigmore Hall, Carnegie Hall, and the Louvre.

Working with his friends

Benjamin still works closely with friends he made while studying at the Curtis Institute in Philadelphia. He often performs with fellow alum, pianist Yekwon Sunwoo, who also accompanies him on the Spectrum album.

He also premiered the work of another Curtis Institute alum/friend, composer Chris Rogerson. And yes, Yekwon was there too on the piano.  The pair performed the composition, called Once, for violin and piano, in 2011 at the Kennedy Center. They went on to perform it at museums in Philadelphia and Boston.

In an interview with PBS, Benjamin described the unique experience and pressure of premiering a new composition:

“I feel very lucky that Chris Rogerson, the composer of that work, is a very close friend of mine. We overlapped at school at the Curtis Institute of Music in Philadelphia for about three or four years. There is definitely that obligation that you feel when a composer is in the audience and especially when you are premiering a piece. There is something very, very huge about giving birth to a piece to the public. No one had ever heard this piece before, and it is your job to play it as effectively and accurately as possible.”

Another interesting note from the Once premiere, is Benjamin’s use of an iPad during the performance. Using a foot pad attached to the iPad, he was able to turn pages of the composition with his foot. He said the piece has some tricky page turns. Benjamin also loves using the iPad to carry around tons of scores and different parts for violin and piano wherever he goes. He doesn’t want use of the iPad to become a gimmick, but he likes being able to use it where it helps the performance.

His other current instrument is the “Engleman” Stradivarius (1709). In 2014, a patron who owns a Guarneri ‘del Gesù’ lent it to Benjamin. He describes the experience as an honor, but wasn’t sure it was the right violin for him. Another patron suggested he try a modern violin. Benjamin discovered that the Stefan-Peter Greiner he tried was a better fit for him at that time, and so returned the Guarneri. Choosing the right violin is a journey for everyone, it seems.

Benjamin continues a busy concert scheduled, throughout North America and Europe, so expect more innovation and new recordings as his career continues to develop.