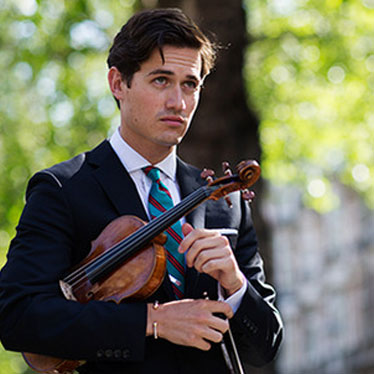 Once in a while, an artist emerges that has the ability to assume the character of the music and translate it into something out of the ordinary. A musician whose roots merge with today’s energy to create artistry that moves listeners with its enthusiasm and respect. Classical and contemporary violinist, composer, and Hugo Boss model, Charlie Siem’s (pronounced “C-M”) talent can be described thus, and his promising career seems to have just begun.

In this artist profile, we’ll examine the training, influences, and professional success of Charlie Siem and discover how his musical talent is bridging gaps between varieties of music genres. The following information has been gleaned from the biography on his website, and from an interview for Port Magazine with Phillip Womack.

Born in London, January 14, 1986, Charlie Siem grew up differently from many young violinists. Although his talent, drive, and enthusiasm for music are all his own and he has diligently forged his own professional career, his father is billionaire Norwegian businessman, Kristian Siem; and he realizes that he’s had many advantages. In fact, an active philanthropist he’s an ambassador for The Prince’s Trust, a charity organization that helps young people find opportunities and education.

Charlie Siem began violin instruction at the age of three, after listening to Yehudi Menuhin play Beethoven’s Violin Concerto. He attended Eton College, and further read music as an undergraduate at Cambridge University. Later, he studied under the tutelage of Itzhak Rashkovsky at The Royal College of Music from 1998 to 2004, and since that time has been mentored by Shlomo Mintz.

Charlie Siem credits his family roots to his intense musical nature. A distant relative of Ole Bornemann Bull, a nineteenth century violinist and composer, this progenitor has had a serious influence on the way Siem embraces music, and the mysticism that can transport you to another time and place through sound. His excitement is centered on the romantic personae, shrewdness, and intelligence Ole Bull was known for, and he tries to emulate those qualities. Similarly, one of his grandmothers was an actress, and Siem approaches every piece of music as a character to be assumed. Performing on stage, he plays the role required for the piece.

Only 30 years old, Charlie Siem is carving fame and international recognition using his incredible talent and charisma. He has a magnetic effect on people and is passionate about bringing classical music to new audiences. According to his biography, he has revived the age-old tradition of violinists in the past by “composing virtuosic variations on popular themes,” working with artists like Bryan Adams, Boy George, and The Who.

His first composition, written in 2014, was commissioned by CBS Watch! “Canopy” was written for solo violin and strings and recorded with the English Chamber Orchestra. He has a current contract with Sony Classical and is a visiting professor with Leeds College of Music, “making him the youngest professor in the UK.” He also conducts master classes at various locations, and he plays the 1735 Guarneri del Gesu violin, once owned by Yehudi Menuhin.

In addition to his musical success, Charlie Siem has collaborated with a number of international fashion brands. His sculpted good looks have graced advertisements for Dior, Armani, and Dunhill. In his interview with Phillip Womack, Siem explains his passion about music and his belief in its power to change lives saying that culture “makes life worth living.”

Truly, one of today’s most promising musicians, Charlie Siem is forging a career that reaches audiences around the globe. Learn more about his upcoming performances and latest musical releases by visiting his website.