How To Choose Inspirational Music For Events

Published by StringOvation Team on September 06, 2018 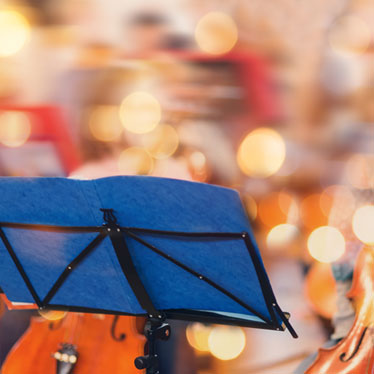 Now that we can all carry around hours of music in our pockets, we’re all living our lives with a constant soundtrack. According to Nielsen, Americans listen to an average of 4.5 hours of music every day. Then add this to the fact that everyone also loves to add music to the videos of life they upload to Facebook or Instagram (watch out for those copyright issues!)

We have some flexibility in the music we choose for regular, daily events – even those we’re recording and uploading. However, when it comes to meaningful, family events like weddings and funerals, our music choices deserve more deliberation.

We love surrounding ourselves with music precisely because it sets and enhances the tone of the moment.  The impact of music is amplified by the emotional intensity of the moment, making music choice a delicate process. To help you out here's some guidance on how to select music for weddings and funerals plus some resources of suggested works.

For the happy occasions – weddings

To clarify, we're talking about how to choose music for the wedding ceremony, not the reception. The ceremony itself has numerous moments, and the strategic use of music is key to delineating them for attendees.  To create a cohesive experience, all the music selected for the ceremony should be from the same genre. If the couple is using live music, say a quartet or soloist, then this is easy to achieve. If the couple is using recorded music, it’s a criterion that needs to be remembered when making music choices.

The different times for music during the wedding ceremony:

While processional songs can reflect the personality of the bride and groom, the critical variable is tempo. Processionals shouldn’t drag, but nor should they have to run down the aisle. As a benchmark, the traditional Bridal March (Here comes the bride) has a beats-per-minute (BPM) of 76. A higher BPM won't just cause a faster walk down the aisle but will create a more energetic, less formal atmosphere. That may be fine, just consider how BPM impacts atmosphere as well as walking pace.

You can find a couple of comprehensive lists of good choices of classical music for weddings here and here.

For the more difficult occasions – funerals and memorials

Of course, the atmosphere music at a funeral or memorial is entirely different from a wedding ceremony. A general rule, the BPM for music used during these events should be on the low end to maintain a sense of decorum. Depending on the culture and personality of the deceased, there may be other remembrance events where the family might prefer more upbeat music that's more celebratory of life than mourning a loss.

Here are the typical uses of music during the mourning ceremonies themselves:

Do be mindful of song length for works performed or played during the service itself. Guns n’Roses November Rain may reflect the tastes and personality of the deceased, but clocking in at nearly ten minutes long – may be too long.

If you are expecting attendees to sing along, pick a song that the average person can sing. Wide octave ranges, big jumps in notes or complicated lyrics won’t work. It will also be thoughtful to include the lyrics in the service program.

To get you started, check out these lists of classical works that work well at funerals here and here.

Have you had to make music choices for a lifecycle event? How did you make your decisions? Share your thoughts on how to pick the perfect song below.