Does Playing The Violin Help With Math Skills? 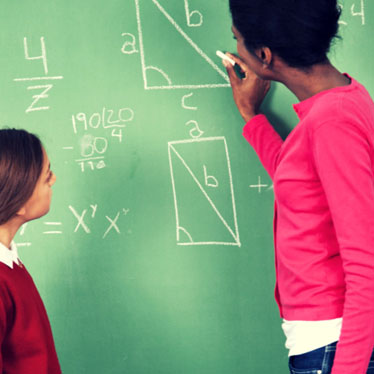 It may seem like a bizarre connection when you first consider it… music and math. The graceful fluidity and mood-enhancing abilities of music may appear like the antipathy of equations and the rigidity of sets, functions, and statistical correlations of mathematics. However, you may be surprised to realize that music and math are integrally linked.

Music has a unique effect on the brain’s impulses and connections. Dr. Lawrence Parsons recently shared his findings with the Society of Neuroscience. By employing magnetic imaging technology, he showed that the brain uses wide-ranging areas when performing music, rather than the localized areas that are active during visual or movement.

Although, it’s only been within the past few decades that doctors and scientists have begun to study this phenomena, the academic results of music instruction on young children and the benefits of music therapy in overcoming neurological disorders have been simply amazing. In fact, there is overwhelming evidence that learning to read music such as when learning an instrument specifically like the violin or piano, that children understand and perform better at math. Take a further look below into the benefits of playing the violin on math comprehension.

Reasoning and How It Relates

It is the ST reasoning that was the subject of the controversial “Mozart Effect” a few years ago. Studies showed that when a person listens to Mozart’s compositions (which are highly sequential), there is a short-term enhancement of this type of reasoning. At first, it was mistakenly considered to increase IQ, but now, scientists are beginning to pinpoint the effects better, specifically as they related to spatial reasoning.

Key features of ST reasoning include:

Many of those scientists are working to identify the correlation between ST reasoning and math applications. Especially how geometry and other higher math principles are effected by ST.

Other Correlations between Music and Math

At the most fundamental level, learning to read music notation and being able to differentiate between tonal pitches are both intricately linked with mathematics.

The musical staff is divided into logical pitch progressions that have a mathematical equivalent. Although to understand music, your child doesn’t have to consciously comprehend those graduations, it’s done automatically in the brain. Similarly, each bar of music is allocated a certain number of beats to create the rhythm, and each note has a mathematical equivalent that indicates its length within the bar. For example, in 4/4 time, one whole note indicates that you hold the note for four beats, half-notes are held for two beats, quarter-notes for one beat, and eighth-notes equal ½ of a beat. Introducing children to these type of basic mathematical concepts at an early age increases their ability to see those connections (and equalities) with fractional operations in math later on.

Moreover, the fixed intervals between pitches on the major scale follows the exact same sequence, five full tones and 2 semitone intervals. When your child learns music, he or she learns this association automatically, which transfers to the mathematical concepts of ordering numbers, sequencing events, and other structured patterns necessary for math comprehension.

Learning music can definitely make a positive impact on a child’s ability to learn mathematics. To discover more about the effects of music on cognitive functions, visit the website for the Music and Neuroimaging Laboratory at Beth Israel Deaconess and Harvard Medical School, and the findings of the director, Dr. Gottfried Schlaug.

Learning the violin? Check out our article on the best ways to learn to play the violin and don't forget to download our pdf below to learn more about how music can increase intelligence.