What's It Like to Be Part of An Orchestra Recording a Film Score?

Published by StringOvation Team on March 04, 2017 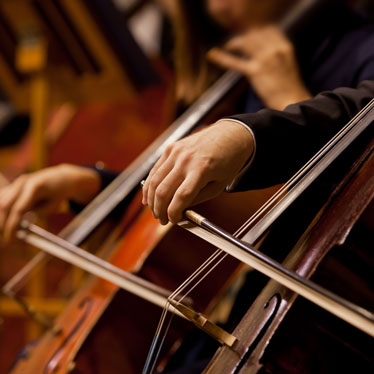 String instrument students who are interested in becoming professional performers often wonder what it’s like to be part of an orchestra recording a film score. This career has an air of romance surrounding it, and can seem chock full of excitement and interest. And while that is true to a certain extent, for most musicians it remains a job like any other. The only difference is that in an orchestra, you get to be part of something bigger than yourself. Everyone works together to create a film that will entertain large audiences and will hopefully win awards and gain lasting success.

So, if you’ve ever wondered what it’s like to record a film score, the following information can give you a small glimpse. Remember, no two recordings, conductors, or scores will be identical, so the experience will vary for each musician.

Recording a film score with an orchestra involves clear, precise timing. As a musician, your timing will already be quite good, but to ensure that the score matches the film exactly, there’s an underlying focus on adjusting your playing to meet the needs of the film. That type of pressure can be a little stressful for some people.

Sometimes, the conductor will arrange for the score to be recorded in concert, with the silent film running on a screen, either a large or small one that is placed where he or she can see it and orchestrate the music appropriately. Other times, the recording will be fitted to it later on, which is rare. Regardless of how the music is joined to the images, timing controls the recording session from the first moment.

Be prepared to play the same thing over and over. Unlike film scores from before the 1960’s, today’s music is very basic and recurring. Although the orchestra members are highly competent, unless you’re working on a score for a movie like “The Red Violin,” be ready to play a simplistic music structure that is performed with a lot of repetition.

Incidentally, when working with an orchestra recording film scores, you don’t often have the chance to examine and practice the music before you see it. Therefore, sight-reading skills are a must. At that level of a professional music career, you should already be a very strong sight music reader, but you should also know that on-the-spot changes in the score are a normal occurrence. The music that orchestra members play varies according to the film, so you might play scary, creepy music one day and romantic music the next. Moreover, in a single film you may be required to play a host of different musical styles.

Depending on the size of the film, many recordings can be accomplished in just one or two days. The mixing, editing, and dubbing take a little longer, and you may be called back to re-do certain sections, but this is rare. Professionalism is the key to succeeding in this career.

Although there are different studios where orchestras record film scores, musicians are generally given headphones and a click track to ensure proper execution. A click track is a synchronization tool that delivers a series of audio cues, and was first developed for film, radio and other image music recordings. Over the years it has evolved, but it remains an effective timing tool for musicians.

In addition to these items, sometimes various microphones are used to create the ensemble sound. However, most professional recording studios that employ an orchestra have sophisticated sound engineering set up, so that during the mixing and editing phases of the project those professionals have available various and specific sounds they need.

Essentially, if you are interested in participating in a film score recording as a musician, you’ll need to develop a variety of playing skills. Like any profession, if recording film scores is where your heart lies, you’ll love it. However, if you wish you were doing something else, it will become a massive bore. It can help to try it on your own or visit a recording (if you can). The Recording Connection and Sound on Sound websites can help. If you do try to record the music for a small film (like a short cartoon or some other video), don’t kid yourself that it will be easy. It’s a lot of work. It’s worth it though when you see and hear the completed project.