10 Songs That Make Your Bass Smoke

Published by StringOvation Team on January 11, 2017 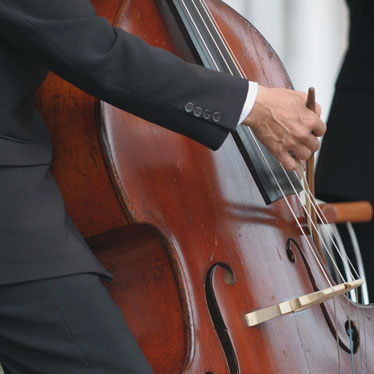 For many beginning bassists, playing the same old classical excerpts can get a bit stale after a while. Students learning the bass are taught fundamental techniques so that they can play anything, but the lessons chosen for beginners and intermediate students often lack inspirational elements. Meaning that you can get bored pretty quickly and lose interest.

Trying out new songs that will make your bass sound awesome can help preserve your enthusiasm. These 10 songs feature iconic riffs that will challenge your playing skills and techniques. They are extremely recognizable and will make your bass smoke because they are the epitome of cool. And although most of these songs are performed by bass guitar, they easily transition to the double bass.

“Fire” –The Jimmy Hendrix Experience, Noel Redding bassist. Although the bass simply accents the lead guitar in the verses of this legendary rock classic, during the chorus, the walking-bass line really smokes. Its funky groove sounds incredible when paired with a lead instrument, but even alone, the bass in this song is outstanding.

“Around the World” –Red Hot Chili Peppers, bassist Flea. Not surprisingly, Flea is renowned for his incredible gift in developing awesome bass riffs, and therefore, many of this band’s songs often revolve around his remarkable talent. This hit from the Californication album features bass lines that truly smoke and offers students the chance to develop some really righteous skills. In fact, just about any track from this band will make your bass smoke.

“YYZ” –Rush, Geddy Lee, bass guitarist. No smokin’ bass song list would be complete without at least one song from this notable band. Although you could choose from a number of Rush songs, this one’s fiery bass line is superb and will definitely challenge your abilities and teach you new techniques.

“Sweet Emotion” by Aerosmith, Tom Hamilton on bass guitar. Probably one of the most recognized bass riffs in rock music, this timeless 1975 release is very suitable to beginner double bassists. With a moderate tempo, you can practice and master this bass line, which is the bedrock for this song, in no time at all.

“Should I Stay Or Should I Go?” –The Clash, bassist, Paul Simonon. Ranked at 228 in Rolling Stone’s list of the 500 greatest rock songs ever, this bass riff is very simple for beginners to learn. With a moderate beat and repeating riffs, you’ll have fun while mastering this iconic rock song.

“Rapture” –Blondie, bass player, Nigel Harrison. The first U.S. song to reach No. 1 on the Billboard Hot 100 chart that featured rap, this 1981 release has a smokin’ bass riff that supports the entire song. Depending on who you ask, this song is either hailed as the birth of Hip Hop, or Rap music, namely since the video, which aired on MTV in 1981, is hailed as the first one to feature rapping. According to Billboard, “Hip-hop visionary Fab 5 Freddy appeared in the clip, as did fellow rap founding father Grandmaster Flash.”

“Brick House” –Commodores, with Ronald LaPread as bassist. This bass riff is total funk. Perfect for beginner students, this song features a groove that has made it a lasting classic, known for its smooth rhythm.

“Under Pressure” –Queen and David Bowie. The incredible bass line in this song is so awesome, it was pilfered about 10 years later by one-hit-wonder Vanilla Ice. In fact, Queen has so many unbelievable bass songs, you can simply pick and choose from among “Another One Bites the Dust,” “We Will Rock You,” or practically any title released by this iconic band. Any one of their songs will make your bass smoke.

“Seven Nation Army” –The White Stripes, Jack White. This 2003 release is another easy bass song to learn, making it perfect for beginners. With its pounding beat and incredible popularity, it was this song that catapulted the band from garage status to stardom.

“Smells Like Teen Spirit” –Nirvana, with bassist Krist Novoselic. From their album Nevermind, this hit was a rage when it was released in 1991 and was played on radio stations throughout the country (back before MP3 players or Sirius XM). The smokin’ bass line creates the foundation for this grunge rock classic.

This list is just a starting point, you can find the sheet music for a number of smokin’ bass songs online. Pick the genre you love, choose a song from your favorite artist, and start practicing. By playing music that you enjoy, you’ll be able to improve your skills quicker, with better results.