11 Cello Compositions You Can Rock Out To

Published by StringOvation Team on May 10, 2019 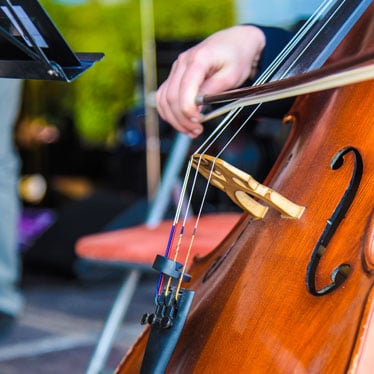 Classical music and the cello go hand in glove, but there's no reason to confine yourself. Learning to play other genres on the cello can help refine your technique and inform your creative choices.

But really, playing contemporary music on the cello is just a lot of fun. Everyone loves it. Modern music may also be more accessible to people inclined to be bored with classical music. We love giving you options, so here are eleven contemporary songs arranged for the cello.

You have tons of options for sheet music, but the below pieces are from MusicNotes. All the prices shown are for one print plus one interactive copy. For $2, you can get an instant pdf download. If you buy a lot of sheet music, their prices are lowered with membership.

Can't Help Falling in Love ($9.99) from the king himself, Elvis Presley. This arrangement of the romantic classic is a duet for cello and piano, and includes both parts.

Bohemian Rhapsody ($3.25) is all the rage today. This song is an operatic rock tour de force. Here you'll find a solo arrangement for bass clef instruments, so it works for cello and double bass.

Game of Thrones Medley ($6.99) is an arrangement by cellist and arranger Nicolas Yee. You can see him perform this arrangement below. Start now, and you can learn it in time for the series finale party!

Something Just Like This ($4.99) is a cello solo arrangement of the 2017 chart-topping collaboration between American electro music pair The Chainsmokers and British band Coldplay.

Believer ($4.99) is a rock star of contemporary rock songs. Many Imagine Dragons songs make good fodder for instrumental arrangements, but this one remains a favorite – it must be the powerful stops. Here's a cover by string trio, Simply Three:

Girls Like You ($9.99) done originally by Maroon 5, re-worked by Adam Levine and then Cardi B, who released this version of the song in 2018. Now you can tackle it with a cello and piano duet version.

Firework ($3.25) by Katy Perry. This is another bass clef arrangement (range G2-D4), suitable both for cello and double bass.

Perfect ($5.50), the Ed Sheeran song, has been covered by performers ranging from Beyonce to Andrea Bocelli, singing in Italian, of course (Andrea, not Beyonce). Why not you? Here's the cover by 2Cellos for inspiration:

A Thousand Years ($5.95) is another popular romantic option. Initially released by Christina Perri in 2011, it reached a broader audience when a version of it was included in the soundtrack for Twilight: Breaking Dawn. This arrangement is a duet for cello or double bass, accompanied by piano.

Shallow ($2.99) is the breakout duet from Lady Gaga and Bradley Cooper, from the most recent version of A Star is Born. Lady Gaga wrote the song with Mark Ronson (of Uptown Funk fame), and others. This is a solo arrangement for cello or double bass.

If all this still isn't enough for you, here's another list of classic rock and contemporary pop songs for the cello.