Choosing A Rosin That's Good For You, Not Just for Your Bow

Published by StringOvation Team on March 29, 2017 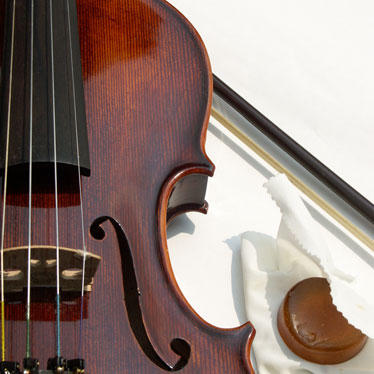 Rosin is one of the most important aspects of playing any stringed instrument, and it’s also the most annoying to deal with at times. However, choosing the right rosin can help to produce the best sounds from your instrument, all while protecting your fingers and helping to make your strings last longer.

How does rosin work?

Strings on an instrument are not capable of producing the tonal sounds that music requires without friction. Rosin is the substance that, when applied to the strings, gives them the friction between your fingers or bow. A brief melting of the rosin happens which creates the resonance in the strings. A good rosin will also respond well to changes in the environment in which you are playing. Humidity is a big problem for all musicians, as it can reduce this friction and alter the sound of your instrument.

What’s in some rosins can be bad for your health

Not all rosins are alike. You will notice when shopping online or at a local music supply store that they generally come in either dark or amber, and then by seasons of winter or summer. Some rosins contain all natural ingredients, derived from various pine and conifer trees, tapped much in the way that maple syrup makers have done for generations.  Sometimes, the sap is then mixed with other resins from spruce, fir, or larch trees. According to Strings Magazine, most of the world’s supply of rosin comes from trees found in Asia, Europe, North America, and New Zealand.

Other rosins include tiny particles of precious metals such as silver or gold that are believed to influence the tone and friction of playing. Still others include essential oils, powders, and artificial gums that are meant to soften the rosin to help musicians with their string grip. Some rosin producers have their own formulas that are so secretive that they will never reveal what’s in them at all.

Have you thought about what’s in the rosin you are using now? Whether you are a beginner or a seasoned musician, it’s important that you know what you are exposing your body and health to. Some symptoms to watch out for include allergies, rashes, and breakouts.

Are you allergic to the rosin you are using?

One of the more common problems with using rosin is developing an allergic reaction while playing your instrument. This can come from the amount of microscopic rosin dust that can get into the eyes, nose, and mouth as the instrument is played. Fortunately, there are some steps you can take to reduce this from happening.

You can also cut down on allergic reactions by never sharing rosin with others, washing your hands before and after playing your instrument, and maintaining your strings and other finishing’s in perfect condition. If you have sensitive skin, you may want to visit a family physician about getting on an antihistamine or using a special lotion to soothe skin. This can help to alleviate any future allergies.

Selecting the right rosin for you starts with using a brand that’s made from only natural ingredients and is manufactured by a company that backs up its products. Magic Rosin produces some of the best natural rosin available on the market today. They feature a special blend of natural tree ingredients and customized packaging.