Published by StringOvation Team on November 16, 2016 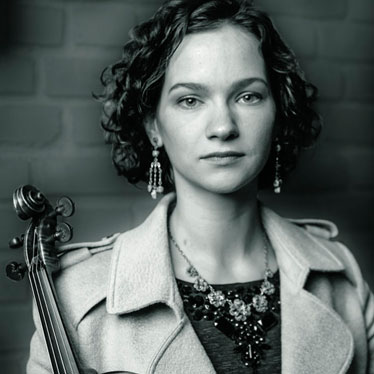 Every once in a while an artist comes along who combines their talent with dedication, intelligence, and unique personal style. An individual who’s been gifted with extraordinary capacities at an extremely early age and uses that talent to excel. In this artist’s profile, we’ll examine the life and accomplishments of three time Grammy Award winner Hilary Hahn. An amazing violinist who’s most incredible talent may be her ability to merge her love of violin with her charismatic personality.

Born in Lexington, VA in 1979, virtuoso violinist Hilary Hahn took her first lesson at the age of three. Using the Suzuki method until age five, she then undertook violin training with Klara Berkovich in Baltimore for the next five years. Her incredible aptitude was present very early in her training, and by the time she was just 10-years-old, she was enrolled in the Curtis Institute of Music in Philadelphia, studying with Jasha Brodsky.

Although Hahn attended public school until she was nine, her academic education in all subjects was conducted at home until she turned 12-years-old. She was further home-schooled in mathematics until age 15. Studying at the Curtis School of Music for nine years offered an intensive music education, and she was able to continue her studies there until she earned her Bachelor’s degree at the early age of 19. Part of that wonderfully swift progress was due to her summer studies taken at the Encore School for Strings in Ohio, and the Marlboro Music Festival and Middlebury College Language Schools in Vermont.

Hahn is no intellectual slouch. Her university studies covered a wide range literature, history, and music. However, it was her violin prowess that established her international acclaim. She made her first orchestral concert appearance with the Concerto Soloists of Philadelphia when she was only 11-years-old. And, a little over a year later, Hahn was performing with the Baltimore Symphony Orchestra.

Hahn’s professional music career kicked off with her first recording, at age 16. Once she had completed her university studies her career commenced; and she has released over fifteen albums since then. By the time she received her degree, she was already a highly sought-out performer, pursing the job of a full-time, internationally touring musician.

Having visited 43 countries on 5 continents, her recordings are well received. In addition to her albums, she has released three DVDs, including “A Portrait,” released by Deutsche Grammophon that displays her stunning range and truly remarkable abilities. As a classical violinist, Hilary Hahn remains true to the spirit of the original compositions, while at the same time, incorporates her own passions in to the music for her listeners. She has graced the covers of almost every international musical publication (as well as many mainstream ones) and appeared on a number of televised programs; and her star continues to rise.

Time magazine named her “Best Young Classical Musician” in 2001, but her 2010 release of the Pulitzer Prize winning violin concertos, written by Jennifer Higdon specifically for Hahn, created world-wide sensation. Higdon had been one of Hahn’s early teachers at the Curtis Institute, and the development and completion of this work is a remarkable journey. You can listen to “Concerto for Violin and Orchestra I. 1726” here.

In 2013, Hahn released “In 27 Pieces / The Hilary Hahn Encores” which featured Higdon and 26 other composers. As a way to increase interest in encore pieces, Hahn held a contest for students and composers, allowing them to submit entries for consideration. The winner’s composition was included in the album, and she earned a Grammy Award in the category “Best Chamber Music/ Small Ensemble Performance” for this recording. Her latest album “Mozart 5, Vieuxtemps 4 – Violin Concertos” is a tribute to her musical heritage.

Part of her incredible success can be attributed to her outgoing personality and terrific zest for life. Hilary Hahn is a violinist who has the remarkable ability to infuse that effervescent personality into her performances, making her one of the most prominent classical musicians of our time. She also enjoys being an avid writer, posting on her websites and social media outlets frequently.

All of the following information can be found at Hahn’s website, and her artist biography on Deutsche Grammophon, along with a complete list of her recordings. You can also view many of her performances on her YouTube channel, including an interview about her most recent album. Or follow her “violin case’s” extraordinary travel posts on its dedicated Twitter and Instragram feeds (@violincase).