How To Read Violin Sheet Music 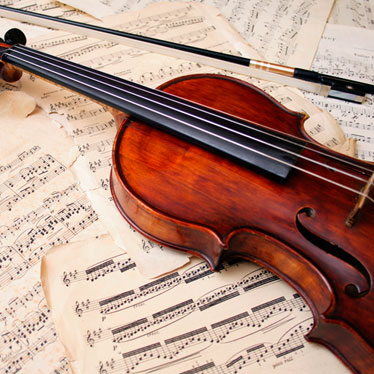 Learning to play the violin, like many instruments, requires mastering the basics by learning to read sheet music. No doubt, there are individuals who can play so exquisitely by ear that they never need to learn, but those gifted souls are typically rare. Like most everyone else on the planet, you’ll need to understand music notation to be able to play an instrument like the violin.

This brief guide can introduce you to the concepts so that you can be prepared to learn to play the violin.

Music composition is written on the staff, a group of five lines with four spaces that indicate pitch. At the beginning of any piece of violin sheet music, you’ll notice the clef symbol. The clef defines the appropriate pitch range. For example, bass instruments play using the bass clef (middle), which is a lower register.

Violin sheet music will be written in Treble clef (seen right) and the pitch is arranged in this order: working from the bottom line upwards, E, G, B, D, and F are the letter names for the notes on the staff lines. The letter names for the notes in the spaces created between the lines are: F, A, C, and E from bottom to top. You’ll notice that the spaces spell the word ‘face’ when reading upwards. When learning to read music, it’s a good idea to memorize the lines of the staff as soon as possible. Wherever a note is placed on the staff, whether on a line or a space, it tells the musician to play that pitch for a determined length of time.

To mark that time, the staff also has vertical lines that separate bars (measures) of music. Each vertical bar represents a certain, definite, number of beats, which is determined by the time signature. The time signature is written directly after the clef symbol and tells the musician two important facts.

There are a variety of time signature combinations, but beginners will start with the basic 4/4 time, also called common time, which is sometimes indicated by the letter C. The top number means there are four beats in each bar (measure) of music. Instructors will have you count the rhythm while tapping your foot: 1 and 2 and 3 and four and... The bottom number will always be an even integer and it explains which note acts as one beat in the bar. In 4/4 time, the quarter note represents one beat.

Each musical note represents a certain number of beats:

So, in a 4/4 time signature, you might have one whole note per bar of music, or two half notes, or four quarter notes, or any combination that adds up to four beats. You can also have thirty-second notes and sixty-fourths, but beginner violinists won’t encounter those at first.

In addition to notes, there are also rests and dots. A rest indicates the amount of time that you do not play, and dots are placed next to notation and used to extend the length of a note or a rest. A dot adds one-half the original length of the note or rest. For example, a dotted half note represents three beats.

Other symbols that indicate flats, sharps, and naturals can be placed either directly after the time signature on the appropriate line or space, or next to the note on the staff. When placed at the beginning of a piece of music, it means that all of those notes should be played with that pitch. For example, if a sharp (#) is located on the space that corresponds to C of the staff, every C should be played as a C#. However, if a C natural is required, the natural sign will be placed next to the note in its particular bar.

While there are many other things to learn about reading violin sheet music, these are the basics. Practice saying the letter names while bowing them and looking at your music. It will help you memorize the staff quickly so that you can move on to other, more complicated compositions. If you are still learning the basics, check out this blog to learn some of the best ways to learn to play the violin.