The Importance Of Harmonics In Playing String Instruments

Published by StringOvation Team on February 14, 2018 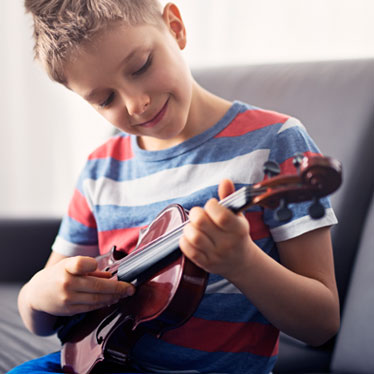 Harmonics play a vital role in the overall quality of sound produced by any stringed instrument. However, understanding harmonics can be quite difficult because the physics behind string vibrations are complex. Fortunately, you can produce harmonics with your stringed instrument and experiment with different sounds to help you understand what they are and how they work.

What is a Harmonic?

When you play any individual string on your instrument, it begins to vibrate. The sound produced is that of the note you are playing, as well as a mix of overtones produced by the different wavelengths of the vibrations. This helps create a warm, well-rounded sound instead of a sharp, abrupt sound like that of a drum. Your instrument naturally produces a variety of overtones on its own. The overtone that matches up with the same note that you played is called the harmonic. It is typically one full octave up, and it is created by a perfect meeting point between your main vibration wavelength and one of your overtone wavelengths. The point where these two wavelengths cross is called a node.

If you were to play an open string on your instrument you probably wouldn't be able to pick out the harmonic on your own because it would be mixed in with all of the other overtones. However, it is possible to play a pure harmonic by gently touching the place on the string where the harmonic node would land. Essentially, the gentle touch of your finger creates a harmonic node at the note that you are playing. This is not the same as pressing down on the string, which would physically shorten the string and its range of vibration. Instead, by placing your finger on the string you are interrupting all of the other overtones on that string except the harmonic node that you have chosen. In this way, you can play harmonics independently and listen to them without all of the competing overtones. You will notice that harmonics sound light and airy, and it requires just the right amount of pressure to produce them. This takes a lot of practice, but you will know you got it right when you no longer hear the earthy bass tones produced by a natural note.

Why You Should Learn Harmonics

As you progress along your musical career, you will notice tiny diamonds written into your sheet music. These diamonds indicate places where you should play a harmonic of the note shown. Harmonics are often used by composers to create a shimmery, bell-like quality that hangs above the music. They give your string instrument a wider range of sounds to work with that fit well within a larger orchestral setting.

Learning harmonics will also give you a better understanding of how notes work together on the fingerboard, and how strings vibrate in concert. On violins and violas, in particular, the short nature of the open strings makes playing harmonics an exercise in division because there is not enough space to play harmonics further down the neck like you would on a cello or string bass.

Ultimately, harmonics play an important role in the uplifting sound produced by many accomplished string players. They are written into music to add a light flavor to the piece. Learning harmonics will also help you better understand how your instrument works, and make you a better musician overall. While it takes lots of practice to master the sound of playing clean harmonics, it is well worth your time and energy. Mastering harmonics will give you the ability to play along with flutes, piccolos and many other instruments that share the same harmonic bell sound.

You may also want to check out our blog about building finger dexterity, which will help you manage your harmonics with better clarity and consistency!