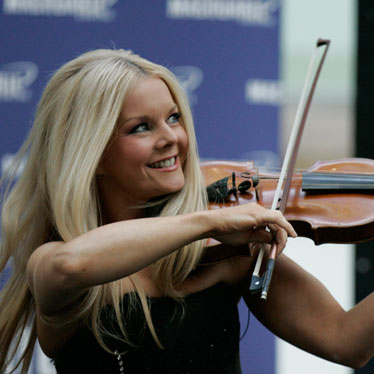 As we continue to examine outstanding violinists, our next featured artist currently forms part of a unique musical ensemble. Máiréad Nesbitt is the solo violinist for the group Celtic Woman, whose commercial success since 2004 has created a cultural sensation. With a combination of ethereal tunes, hauntingly familiar melodies, and an incredible vitality, this talented lady has earned a reputation for delivering performances that energize, touch, and inspire audiences. Yet, it is her approach to music that characterizes this popular violinist and distinguishes her unique sound.

Born into a musical family in Loughmore (Loughmoe) village, County Tipperary, Ireland, on April 18, 1979, Nesbitt was immersed in music from a very early age. Her parents, both music teachers, and her five siblings are all musicians; and she began playing the fiddle at age six. Her early classical music studies were conducted at The Ursuline Convent and continued at the Cork School of Music, where she participated in the National Youth Orchestra of Ireland.

Finishing her post-graduate studies at the Royal Academy of Music and Trinity College of Music in London with Emanuel Hurwitz, Nesbitt credits a variety of early musical influences. In addition to her classical education and performers such as Itzhak Perlman, she mentions Irish fiddlers Liz Carroll and Michael Coleman, Jazz artist Stephane Grappelli, bluegrass performer Allison Kraus, as well as Sting, U2, and David Bowie as making an impact on her tastes and style.

She began her professional career at the age of 16, joining the RTE (Radio Telefis Eireann) Orchestra in 1995. However, by the following year her playing had attracted significant notice; having worked with Van Morrison and other musicians as well as recording an album with the group Coolfin, she was invited to perform with Michael Flatley’s Lord of the Dance. She remained lead fiddle for this, as well as his second show, Feet of Flames until 2001, having performed three world tours and recorded both soundtracks, along with the soundtrack for the original Riverdance.

Her debut solo album, Raining Up, was released in 2001, and its broad range of music (including original compositions created by her and for her) reflects her individual approach to merging both traditional Irish music, which is mostly played by ear without much vibrato, and classical music, which relies heavily on reading specific sheet music compositions. Although discouraged from trying to learn both traditional and classical styles, on her website biography she states, “I knew from an early age that I wanted to play in both styles, so I developed different bow-holds for each.” This unique approach and her wholehearted passion for versatility and playing intensity, led to an invitation by Sharon Browne and David Downes to become a member of Celtic Woman, the ensemble group created in 2004.

Nesbitt stays busy performing with the group, but she is always reaching and growing. Her recent accomplishments include:

Nesbitt has a dynamic stage presence that is easy to recognize and appreciate. Elaborating on what she strives to create as a musician and a person, she said “energy” and “beauty;” and for anyone who has ever viewed her performance, those are exactly the descriptions that come to mind. Check out these videos that display her incredible passion and versatility:

Speaking to Katrina Tulloch in an interview last year, Nesbitt commented on how it felt to be an original member of Celtic Woman as the group celebrated 10 years of success, saying "For me, being there for 10 years, you always have to approach it with freshness.” She also explained that her movements on stage have, “always been a natural thing to do. I wouldn't be able to do very choreographed moves in my solos. I only do what makes sense to me." This year’s Celtic Woman North American tour is entitled “Destiny;” and you can view locations and dates here.

Máiréad Nesbitt brings a unique approach to her playing, saying that “music is a very primary, very emotional form of communication,” and feels that touching people in an honest way (though music) is “the most important thing an artist can do.” She has definitely succeeded. The enchanting combination of classical, traditional, and contemporary styles she creates enable her to deliver electrifying performances that speak to audiences, propelling her accomplishments and making her one of today’s modern master violinists.