Secret Stories Behind The Greatest Classical Compositions: Copland’s Fanfare For The Common Man

Published by StringOvation Team on February 07, 2018 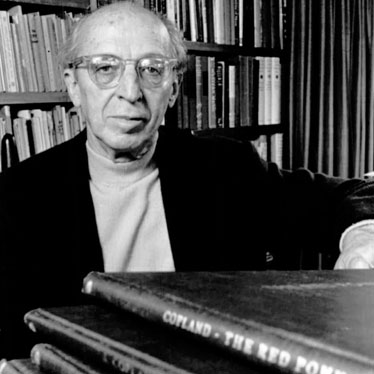 You've probably heard Fanfare for the Common Man a thousand times in some variation - from film and television to rockers Emerson, Lake & Palmer's styled rendition.  But where and how did this renowned musical composition originate?  Let's find out.

Fanfare for the Common Man was written by American composer Aaron Copland (1900 - 1990), often referred to as "The Dean of American Composers." Copland's music evokes images of the American landscape and the pioneers of the West, in a vernacular style heard in such renowned works as Billy the Kid, Rodeo, and Appalachian Spring.

Copland was commissioned to write a fanfare (a majestic blend of trumpets, brass, and drums usually played to announce the arrival of an important person, such as a king or queen) in 1942 by the Cincinnati Symphony Orchestra, under the direction of conductor Eugene Goossens. The commission came during America's entrance into World War II at the end of 1941.

In his biography, Copeland wrote: "Goossens had written to me at the end of August about an idea he wanted to put into action for the 1942-43 concert season. During World War I, he had asked British composers for a fanfare to begin each orchestral concert. It had been so successful that he thought to repeat the procedure in World War II with American composers."

The inspiration for Fanfare came from then Vice President of the United States Henry A. Wallace's famous speech of early 1942 when he proclaimed the dawning of the "Century of the Common Man."

Coming up with a title

Goossens suggested titles to Copeland such as Fanfare for Soldiers, or sailors, or airmen, and he wrote, "It is my idea to make these fanfares stirring and significant contributions to the war effort." Copland considered several titles such as Fanfare for a Solemn Ceremony and Fanfare for Four Freedoms, but ultimately titled the piece Fanfare for the Common Man.

Although most of the fanfares by Goossens’ symphony had military themes, Copland took a different approach. "I sort of remember how I got the idea of writing Fanfare for the Common Man," he recalled later, "­It was the common man, after all, who was doing all the dirty work in the war and the army. He deserved a fanfare."

Upon hearing the final work, Goossens wrote to Copland, "Its title is as original as its music, and I think it is so telling that it deserves a special occasion for its performance. If it is agreeable to you, we will premiere March 12, 1943, at income tax time."

A total of eighteen fanfares were written at Goossens' bequest over the years, but Copland's Fanfare is the only one which remains in the standard repertoire to this day. The stirring patriotic feelings that the work inspires was best summed up by Sean McCollum in an article for the Kennedy Center, "Unlike most fanfares, Copland's is slow and majestic. It starts with percussive drums, gong, and timpani, rumbling like a distant battle. Then the clear, clarion call of three trumpets, playing in unison, establishes the main theme. French horns join the trumpets, building support and harmony. Finally, the growls of trombones and tuba emerge from below as the fanfare builds to its climax — the brass ensemble establishing a powerful wall of sound. Fanfare for the Common Man seems to capture in music the notion of people bravely joining forces to stand against danger."

Uses of the Fanfare

Copland later used Fanfare as the main theme of the fourth movement of his Third Symphony composed between 1944 and 1946. Over the years alternative versions have been made, and fragments of the work have appeared in musical scores of films, such as Jimmy King's theme in Ready to Rumble and the Bollywood film Parinda. John Williams' main themes for the 1978 film Superman and his score for Saving Private Ryan, both draw heavily on Copland's piece.

Other trivia tidbits include Fanfare being played at the Los Angeles Airport as the space shuttle Endeavor touched down after its final flight on September 21, 2012. It was played by the New York Philharmonic at the dedication of the 9/11 Museum in lower Manhattan on May 15, 2014.  It was also played at Independence Hall in Philadelphia on September 26, 2015, as Pope Francis appeared to make a speech on religious freedom, delivered from the lectern used by Abraham Lincoln to deliver the Gettysburg Address.

Take a listen to the New York Philharmonic, conducted by James Levine, play the Fanfare.  How does the music make you feel?