Published by StringOvation Team on July 31, 2017 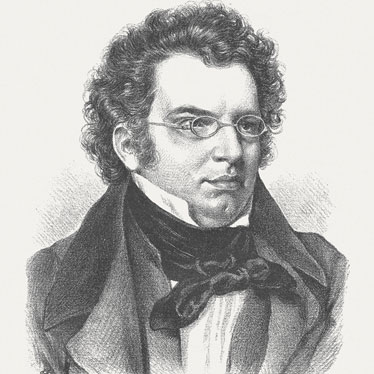 Franz Schubert is primarily known for his piano sonatas and chamber music, and deservedly so. Yet his most famous single work is a symphony. Well, a partial symphony anyway: his “Unfinished Symphony.”

Even so, when people talk about the “Unfinished Symphony” without further clarification, they only mean one symphony: Schubert’s Symphony No. 8 in B minor (D.759). Having this unofficial title for the work is helpful since it’s also sometimes listed as Schubert’s seventh symphony. Most refer to it as his eighth symphony to avoid confusion (ha!) with Schubert’s other unfinished Symphony No. 7. This other symphony was unfinished, but more complete than the Unfinished Symphony in that this other composition had parts of all four movements sketched out by Schubert. In contrast, the Unfinished Symphony has only two complete movements, a scherzo of a third comprised of only 30 bars of full orchestration and 112 bars in short score, and nothing of a fourth movement.

Schubert composed what we have of the Unfinished Symphony in 1822, when he was just 25 years old. He was awarded an honorary diploma from the Graz Music Society in 1823. As a thank you, he dedicated the piece to the society and sent the two completed movements to Anselm Hüttenbrenner, Schubert’s good friend and member of the society. For some reason, Schubert’s good friend held on to the pages and never told anyone about them until 42 years later in 1865.

Hüttenbrenner gave the work to friend and conductor Johann von Herbeck. The first two movements, all that Schubert had given Hüttenbrenner, were premiered on December 7, 1865 in a concert given by the Society of Music Friends in Vienna. Herbeck decided to “finish” the work and followed the two movements with Schubert’s Symphony No. 3 in D major. While closing the work with the third symphony never took, the public immediately appreciated what existed of the Unfinished Symphony. The two movements were first published in 1867.

The scherzo was discovered among Schubert’s papers after his early death just five years after he shared the first two movements with Hüttenbrenner.

So this all begs the question: Why is the symphony unfinished?

The short answer is that no one knows, but of course there are many theories.

Making news in the 21st century

Since Schubert’s early death, there have been numerous attempts by composers to finish his Unfinished Symphony. On the 100th anniversary of his death in 1928, Columbia Records even held a worldwide contest for the best composition finishing it.

However, a recent discovery may change everything we know about this work. A six-page fragment of a musical score, written in Schubert’s hand, was found in 2017 in the attic of house undergoing renovations. The house, in Vienna, is near the Schubert Museum, which is housed in Schubert’s final home.

The fragment, which has been verified by Schubert scholars, fills out the third movement orchestration, ending it in D major, the relative major of the work’s home key of B minor.

We may find that the Unfinished is more accurately called the “Yet Undiscovered.”