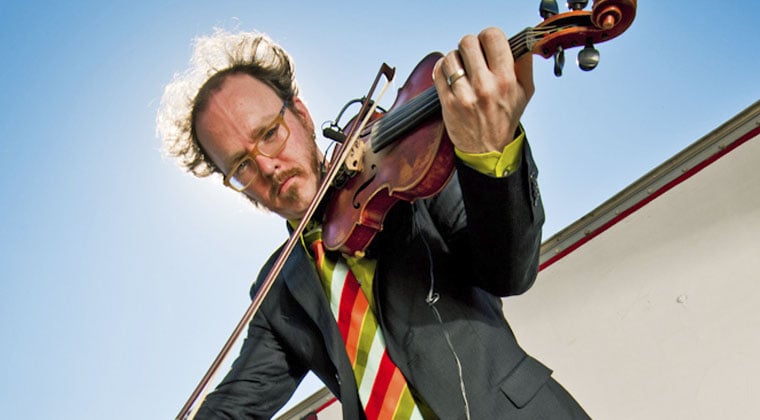 Given the rich history of the violin along with how well it adapts to different styles of music and responds to personal expression, it may seem wonderful that there are still new territories to explore on this much beloved instrument. However, as this next artist has discovered, the violin is a source of endless transition and versatility.

Our next featured artist, violin virtuoso Casey Driessen, is striking new paths in original music by merging almost every genre of music into his incredible performances. His work is difficult to characterize or even classify, having been training in both classical and old time fiddling traditions, but there’s no denying that both his musical talent and imagination are extraordinary. He doesn’t so much as play the violin as he coaxes a wealth of percussion, harmonics, and musical artwork from both his acoustic and electric five-stringed instruments.

Casey Driessen was born on December 6, 1978 in Owatonna, Minnesota, and was influenced by a variety of music genres during his formative years. In a 2009 article, “Beyond the Fiddle” for the Aspen Times, Driessen talked about his early training and how embracing different musical styles helped him develop into the performer he is today.

He began training with the Suzuki Method of classical violin at the age of five, but by the age of seven, his music education had shifted to his father, who played banjo and pedal steel. Although the elder Driessen had bluegrass roots, he saw to it that Casey was exposed to a variety of musical styles including jazz. By the fourth grade he was playing with the jazz orchestra at public school and later, playing mandolin with the jazz band. He also regularly attended bluegrass festivals, absorbing the aspects unique to that style, while honing his playing skill.

However, an opportunity to play with Minor Bluegrass, a Chicago band had a significant impact on the young performer. With a mandolin gap in the group, Driessen filled that role first with the mandolin and eventually using his violin, stating it was then that he, “developed [his] percussive violin technique.” And although he originally thought that he had created something totally new, he discovered that he wasn’t the first musician to delve into the realm of “chopping.”

By the time he’d graduated Homewood-Flossmore High School and was enrolled in the Berklee College of Music, he was committed to jazz. But, rather than pursue it with single-minded determination, he found himself interacting with Motown and R&B enthusiasts. This Grammy nominated artist explained that that was “more input,” and that he is always thinking, “’How do I add to this music;’” a philosophy that has served him well since graduating in 2000.

In addition to appearing and recording with artists like Steve Earle, Tim O’Brian, and Abigail Washburn (including a 2006 Asian tour with the Sparrow Quartet), Driessen has released three records. His latest offering, The Singularity, is truly a one-man compilation and showcases his talented ability to captivate audiences by laying down, layering, and looping several tracks together onstage. The sounds used to create the music on the album are performed by his violin and his voice alone, saying on his website that, “There’s no multi-tracking… listeners are only hearing my voice and what I send through the pedal board.” His song from that album, “Heartbeat Kid” was the subject of his 2012 TEDx talk where he explained its origins (his daughter’s utero heartbeat).

He is at “his core,” a bluegrass fiddler, but there’s no denying Driessen versatility. See him tap his trademark red shoes as he performs “Jerusalem Ridge” (from his first album, 3D), with the Colourfools at Merlefest 2011, or view this recent outstanding rendition of Michael Jackson’s hit, Billie Jean, recorded like much of his music, at his home studio in Asheville, NC.

Driessen has also developed training curriculum and educational tools for learning the “chop” bowing technique that he has perfected, and he has acted as an instructor at various music camps, helping determined students develop and strengthen their own musical abilities.

By exploring the range of the violin, Casey Driessen is pushing the boundaries of his musical talent and discovering new and exciting frontiers. However, it is the fact that he approaches those musical possibilities with an open mind and a creative outlook that has contributed to his steady success as a musician and an artist.