Published by StringOvation Team on July 07, 2017 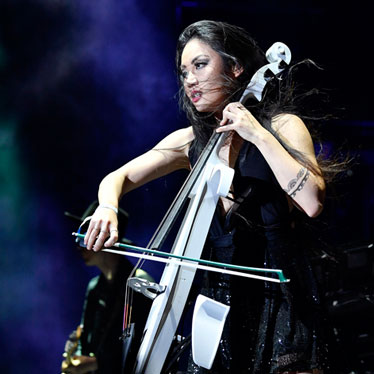 Tina Guo is a prolific cellist – and renaissance woman! If you haven’t heard her name, you’ve certainly heard her music. She plays both acoustic and electric cello. Her sample library of cellos solos is one of the most popular with producers, and heard in numerous media music projects. Tina’s live performance schedule is also filled with popular media and events. Some of her notable contemporary music performances include performing with

Some of the special events she’s performed at include:

Her love of video games has led her to take on featured performing roles at Comic Con, Blizzcon and Video Games Live. Also a composer, her music has been in games such as Call of Duty. Her most recent album (the tenth) is titled Game On. But don’t worry that she’s forgotten her classical roots. She also

You can see a good example of her temperament and style in this clip of her musical battle against blues guitarist Joe Bonamassa, performed live at Carnegie Hall.

Where she got started

Tina was born in Shanghai, China. Her family immigrated to the United States when she was five years old. Her musical education began when she was three with piano lessons. At five years old, she started violin lessons and finally got around to the cello when she was seven. Her father, Lu-Yan Guo, was her first cello teacher.

Tina joined the Civic Youth Orchestra (CYO) when she was ten years old. In an interview with The San Diego Tribune, the CYO music director, Robert Gilson, remembers that when Tina first joined, she was “practically the same size as her cello.” Tina described her experience with CYO and the lasting impact it’s had on her career:

“I still play classical music, but also many other genres now. Any musical or artistic training helps expand our arsenal of tools for expression. Mr. Gilson really helped shape the musical lives of so many students, always patient, enthusiastic, and fun.”

Later, Tina attended USC’s Thornton School of Music on a full scholarship, where she studied under Nathaniel Rosen and Eleanor Schoenfeld.

One of Tina’s most recent creative accomplishments is her partnering with renowned composer Hans Zimmer in composing Wonder Woman’s theme. The original sample of the theme, titled “Is She With You,” was used to introduce Wonder Woman’s first appearance in Batman vs. Superman. The piece, with Tina’s solo performance, is now the full theme used in the Wonder Woman blockbuster.

Tina talked about the experience composing the piece with Zimmer in an interview with InStyle magazine.

“For actually writing the original Wonder Woman theme for Batman vs Superman, I went into the studio two or three days in a row and we went through so many different ideas. Working with [Zimmer] is high pressure because I want to make sure everything sounds perfect. I've always been a bit of a workaholic, and he is too. So, if anything he just confirmed my unhealthy lifestyle—it's like a contest to see who can sleep the least.”

In addition to the piano, violin and cello, Tina also plays the erhu, a two-stringed bow instrument that originates in China.  She has a degree in metaphysics, as well as music. She’s also a published author. Her book Event Horizons of Yin and Yang is a collection of poetry and philosophical musings.

Expressing her charitable side, she released an album in 2015, Tina Guo & Composers for Charity. All the proceeds of this album went to fund Mr. Holland's Opus Foundation in support of music education.

The acoustic cello she uses to perform is an 1878 Gand & Bernadel made in Paris. Her electric cello is a customized Yamaha SVC-210.