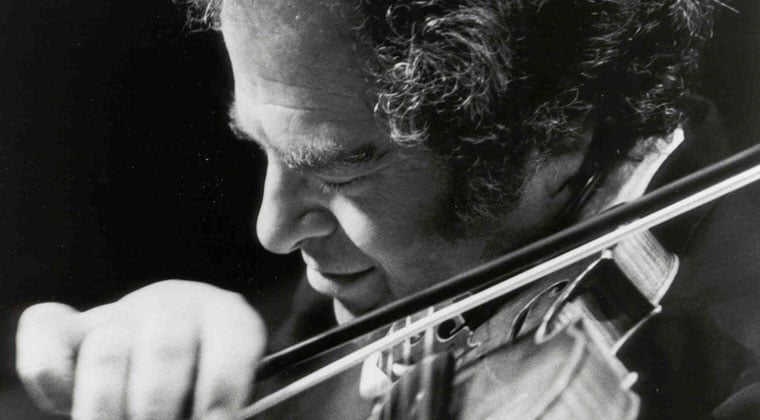 If you could speak to any celebrity violinist, dead or alive – who would it be? Whose brain would you like to pick about their career, their thoughts about music and performing, and how they achieved what they did?

Well, we’ve gathered some thoughts from some of the greatest violinists who’ve ever been interviewed (so sorry, Paganini wasn’t consulted for this post). Read further to find some nuggets of wisdom you can hopefully incorporate into your own practices and performances.

Zukerman reiterates what you probably already know but hate to admit. Practice time matters. Of course the quality of the practice matters as well, but there is some undefined tipping point somewhere about the quantity. It doesn’t matter how well a single practice session goes if they don’t happen often enough.  On practicing, Zukerman said,

“The audience shouldn't see the hard work – but of course the work exists. The effort is making sure that you’re well prepared. Whether you're playing or conducting or playing chamber music, you must always be well prepared. That demands practice for a certain amount of hours a day.”

A day.  A day. This attitude shouldn’t be surprising from the man who also felt that “music education shouldn’t stop when you step out of music school. “Learning is the habit of an open mind and it all starts with listening.”  Oh, and the best way to learn this habit in Zukerman’s opinion?  Chamber music.

Violin concerto virtuoso Zimmermann agrees with Zukerman. When asked what the secret of his success was, he said,

“Practice a lot! All great artists practice like hell, like Jascha Heifetz. You have to know your limits, and plan your repertoire and schedule carefully. Violinists like Nathan Milstein, Jascha Heifetz, they think in long term. Like in a movie, Clint Eastwood said, ‘A man has to know his limit.’ You have to live with discipline, rests are important, making the right judgment is important.”

He also made the deliberate effort to re-engage with familiar works, “seeking fresh perspectives.” Zimmermann felt it is important to always be searching for new nuances and approaches, and not get comfortable with a work.

But speaking of Jascha Heifetz…

Heifetz offers some insight into how to practice, getting to the quality issue (now that the quantity issue is unchallenged).  His bottom line point was: Don’t let yourself off the hook. He explains,

“Work hard, work honestly and work intelligently. When practicing, concentrate and listen to your playing. Do not let errors go by without correcting them. Practice those spots more, if need be. Bad practice and bad habits are difficult to get rid of later on.”

“…always began with scales. He also did not believe in practicing too much, confining his practice to an hour or so of scales in the morning and an hour or so of selected parts of repertoire in the afternoon.”

Wait, didn’t we just learn that practice quantity matters too? This quote touches on not practicing “too much,” not “a lot.” Perhaps we can read “quantity” to mean “consistency.” The actual amount of time would depend on what you want to achieve and what type of practicing helps you advance your skills.

But what’s the goal of consistent, high quality practicing? According to the Israeli virtuoso

“I try to make students understand that they shouldn’t only be motivated by perfect technique. It sounds like a cliché to say music is the most important thing – it’s so obvious. Technique should be about gaining the ability to play what you are feeling and what you want to give, to create a situation where when you play, you forget about your work. If someone comes to me after a concert and says, ‘You must have practiced a lot,’ it means I must have played badly.”

This echos Zukerman’s opinion that audiences shouldn’t see the work. But it also touches on something else – that connecting with an audience requires being able to communicate your vision and expression through the work to them, not just perform what’s written.

Gitlis’s focus on being able to “play what you are feeling and what you want to give” ties in perfectly with Perlman’s advice about listening.

“… when you play an instrument, because you're involved physically, sometimes it interferes with your ability to listen correctly. So the challenge is to listen and not be affected by how you feel but by how it sounds.”

How many young violinists has Menuhin helped and supported to greatness? In this interview, the maestro and violin virtuoso gets to what can distinguish practicing from rehearsing:

“It’s important to know what to rehearse, how much to rehearse, what to leave — what one can leave with confidence, what one must leave either because one wants to keep the expectation at its apogee or you may just dull the edge with a little too much work; or one must leave things for another time because it’s too much to demand them at that moment because you’re keyed up for a concert.  And you may have a lunatic idea which you want to try, and you think, ‘Well, I’d better not tonight.’ “

If you want to hear what celebrity cellists have to say, check it out here. What other celebrity violinists would you like to hear from? Let us know and we’ll put together another round up of advice from the greats.