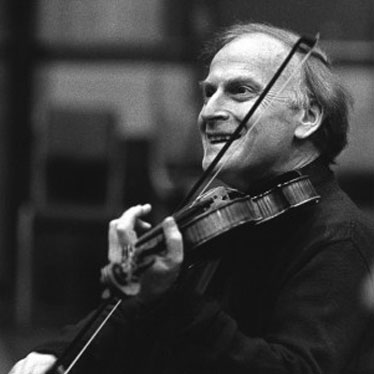 As we continue to explore modern violin virtuosos, this next artist is unarguably one of the greatest violinists of the twentieth century, and some would say, of all time. Yehudi Menuhin’s life and talent helped shape our culture, and his influence is still shaping lives today, seventeen years after his death. More than just an incredible talent, this artist, pedagogue, and patron exemplifies a life spent adhering to convictions of uncompromising excellence.

So much of Yehudi Menuhin’s remarkable life is well known. His memoirs, and the many biographical works that celebrate his achievements provide insight into how he developed his gift, how he handled fame at a very young age, and how he was able to create a lasting legacy.

Born in New York City on April 22, 1916, Menuhin’s parents had emigrated from Belorussia and became American citizen in 1919. Two years after Yehudi was born, his family moved to San Francisco. Incidentally, his rather ambiguously unique name (it means “Jew” in Hebrew) was given to him by his mother. While searching for an apartment, his mother, who was pregnant at the time, was affronted by blatant antisemitism and vowed that her child would be known for his race.

Menuhin began studying under Sigmund Anker when he was five years old, and stated lessons with Louis Persinger two years later. It didn’t take long for incredible gift and genius for music to emerge. His official website includes some of his personal observations about that time, saying “When I began, it was pure instinct” and “I was, in some ways, the pupil of Persinger’s abandoned dreams.” He made his first public appearance at the age of seven, and the following year, performed a full recital with Persinger that amazed the audience. In 1926, he made his debut at the Manhattan Opera House and also performed his first concerto with the San Francisco Orchestra.

By the time he was 11, Menuhin was steadily gaining international recognition. He debuted at Carnegie Hall with the New York Symphony Orchestra and in Paris with the Lamoureux Orchestra to jaw-dropping acclaim, having started learning under the tutelage of George Enescu. He states that it was at this age that he began to “dream of conducting an orchestra,” and in 1928, he made his first recordings for Victor (EMI), which initiated a relationship that lasted for almost 70 years.

At age 13, he was gifted the Prince Khevenhüller Stradavarious by Henry Goldman, and performed his first concerto in Berlin. Over the next few years, the Menuhin’s established family homes in both Basel, Switzerland and within the vicinity of Paris.

Menuhin’s career was a lifelong pursuit of music, and over the next two decades he would perform with countless orchestras and professionals around the globe. However, when the US entered the Second World War, Menuhin used his talent to entertain allied troops, performing more than 500 concerts as well as for the liberated cites and survivors of concentration camps in Europe.

During the 1950’s, he appeared in South Africa, India, and Japan, discovering yoga and sitar music. He performed in Israel, despite threats. And, it was also during this time that he began to become more involved with teaching. He began holding classes in Fontainebleau in 1954, and he established the Gstaad Festival and Bath Festival Orchestra in ’57 and ’59, repesctively.

In 1963 he established the Yehudi Menuhin School in London and was made an honorary knight of the British Empire in 1965, which would be changed to a life peer appointment twenty years later.

Menuhin’s deep conviction and the ability he had to focus every particle of his energy and mental capacity on his playing is evident when you watch or hear him perform. Indeed, his movements look effortless and relaxed, but the sound he produces is invigorating and alive. After his first concert in Berlin (when he was 13), his biographer Humphrey Burton recorded a remark that Albert Einstein, who was in the audience tearfully said, “the day of miracles is not over… Our dear old Jehovah is still on the job.” And, that is exactly how you feel when you hear Menuhin; it’s a blessing to the world.

The competitions and schools he established have become well-known and highly respected throughout the world, they include the International Menuhin Music Academy, International Yehudi Menuhin Foundation, and others. This much beloved artist’s legacy will continue to enrich our lives and our culture for years to come.