How Teaching Music To Special Needs Children Can Change Their Lives

Published by StringOvation Team on November 02, 2016 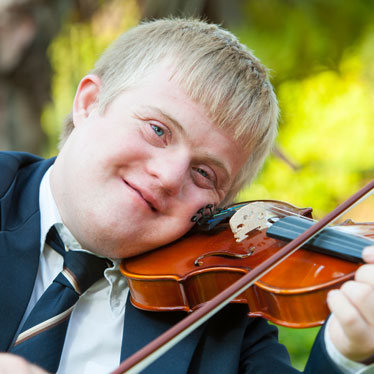 Over the last few decades, there has been a substantial increase in the research concerning music therapy. With the ability to monitor ongoing cognitive activity, entire departments of clinicians and scientists are now dedicated to studying how listening and making music impacts physical and emotional health. Because music is a universal language, able to be interpreted regardless of language barriers, it creates a unique connection. Researchers around the globe are exploring the benefits, influences, and developmental goals that teaching music to special needs children can achieve.

However, many parents and educators are unaware of the startling improvement that both music therapy and music education can have on the lives of children with special needs. By giving these children a powerful tool that can build their communications, motor, and social skills, music training provides an effective way for them to understand themselves, other people, and the world around them.

Regardless of the special need, music has the ability to totally transform lives for the better, because it effortlessly generates a safe learning environment and according to Barbara Crowe, former President of the National Association for Music Therapy (which is now called the American Music Therapy Association), it can bridge the gap “between withdrawal and awareness… isolation and interaction.”

Because listening and performing music stimulates almost every area of your brain, and almost all of your sensory systems, its positive influence on cognitive functions is immense. Instructors who incorporate music into the student’s Individualized Education Plan (IED) introduce concepts and methods that change their lives by fostering self-awareness and self-expression.

Music is non-verbal. Imagine that you are lost in a foreign country where you don’t speak the language. Something dreadful has happened and you can’t even communicate your need to the helpful residents, which generates feelings of inadequacy, frustration, confusion, and depression. With special needs students, breaking down the barriers of speech through music offers a sense of understanding.

Moreover, when you use specific music for special needs children, it offers an effective way to develop verbal skills. In fact, there are many resources that supply custom music, which is designed to isolate speech sounds or deliver memory and learning aids. Being able to effectively communicate and interact with others also gives children a healthy, positive outlet for their feelings.

Percussive instruments are particularly effective in changing the lives of special needs students. When a student uses an instrument like a maraca, there is an instant response to an action, and the sound is immediately produced. This is especially beneficial for students who have sight limitations, allowing them to explore physical perceptions and creative experimentation, while simultaneously strengthening their coordination.

The beauty of music participation is the fact that every child can get involved in making music to some degree.

By offering a multi-sensory experience, making music engages almost every neurological system. When you create any type of music, even if it’s simply banging a drum to a specific rhythm, both sides of your brain are stimulated.

Recently researchers in Finland revealed how just the act of listening to music activates “wide networks in the brain, including areas responsible for motor actions, emotions, and creativity.” In the study published in the journal NeuroImage, music “employs large-scale neural networks,” including the limbic area of the brain which is associated with emotion.

Using music for special needs children offers a positive way to motivate behavior. By communicating a question non-verbally, the child is motivated to respond. For example, demonstrating a drum and then prompting the child to make a request, e.g. “I want the drum.”

For social interaction within a small or large group, music is an invaluable tool. Children learn how to take turns, how to listen and respond to another person, and completely participate in an activity. These actions are often an incredible relief for children who have otherwise been unable to contribute to the task.

Music changes lives because it has the power to remove physical and verbal barriers as well as introduce behavioral improvements. These fundamental achievements strengthen the self-awareness and confidence of special needs students and give them effective resources for communicating with others and interacting with the world around them. Learn more about using music for special needs children by reading through the research listed at the National Center for Biotechnology Information, US National Library of Medicine.