Can Learning To Play The Violin Improve My Child's Grades? 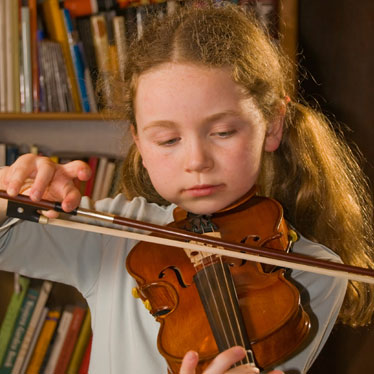 Many parents wonder whether learning to play a musical instrument will offer any additional benefits for children, such as improved social skills, cognitive functions, and grades in school. If that describes you, then you may be interested to learn that recent studies have measured the effects of music education on child development and academic achievement—with very compelling results!

Music is an enjoyable pastime and knowing how to play a musical instrument, such as the violin, is an excellent outlet for free expression. But, research conducted by Laurel Trainor, director of the Institute for Music and the Mind at McMaster University in West Hamilton, Ontario, and colleagues shows a clear correlation between musical training and the responses of the auditory cortex. Even only 1-2 years of training can have a positive impact on (enhances) memory and attention levels, she found.

While discussing her findings with a group of auditory experts, Trainor explained how larger claims can be made for enhanced memory and other cognitive functions based on the level and length of musical training.

And, Gottfried Schlaug, a researcher at Harvard University, and his colleagues found a correlation between early-childhood training in music and enhanced motor and auditory skills as well as improvements in verbal ability and nonverbal reasoning.[1]

While increased motor skills and auditory functions have been found, within the past decade, enormous strides have been made in connecting the research with a correlation for increasing IQ levels and better performance in school (i.e. better grades).

According to a study published in the Journal of Educational Psychology (Vol. 98, No. 2), organized music lesson are linked with benefits to academic performance and IQ. The researcher, E. Glenn Schellenberg, a psychology professor at the University of Toronto at Mississauga, built on his previous findings regarding increased IQ levels in 6-year-olds who received at least one year of musical training.

However in this study, he observed two groups, children ages 6-11 and college freshmen. "There is dose-response association," explained Schellenberg. As a general assessment, the longer a child takes lessons, the higher the IQ and the better the performance in school. Overall, the study found that taking music lessons in childhood was a significant predictor of a higher IQ in young adulthood and a history of better high school grades. For the younger children, the study found a positive association between music lessons and higher school grades and higher scores on achievement testing in mathematics, spelling and reading.[2]

Although there was much controversy over the so-called “Mozart effect” back in mid-90’s, the most recent research has confirmed the beneficial advantages of learning the violin, or participating in some other formal music instruction for a regular amount of time.

Children can experience physical, social, and mental advantages through music instruction. The physical exertion helps improve posture and upper body strength, and being included in a member of a group who enjoys the same activity is a wonderful enhancer of self-esteem. But the cognitive improvements of learning to play a stringed instrument are simply too overwhelming to ignore. College entrance exam scores, such as the SAT, are traditionally higher, and academic performances are improved.

So if you’ve ever wondered if learning the violin can help your child success in school, and later in life, the answer is yes. And, the longer your child keeps at it, the better the results can be.