Published by StringOvation Team on July 31, 2018 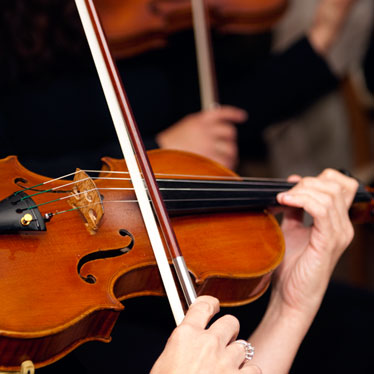 The conductor is the most important figure in the orchestra, but the first violinist - also called the orchestral concertmaster - is a close second. For music students, the coveted "first chair violin" position is more about "being the best" than anything else. It's a consistently dangling carrot and the subject of much controversy and competition if orchestra or band teachers aren't diplomatic themselves.

At the professional level, however, there is much more to it than being the most proficient violinist. In fact, former London Symphony Orchestra concertmaster, John Georgiadis, was quoted in The Strad, saying, "I feel it is a big mistake to choose a concertmaster just for their playing ability..." Great concertmasters have much more going for them than technical proficiency and depth of musical expression – they are leaders and mentors in every sense of those words.

They have eyes (and ears) in the back of their heads

Not shy about disciplining peers

It's difficult to imagine a professional orchestra requiring discipline, and yet professional musicians are still human and their desires to socialize, joke, sleep in, neglect practice from time-to-time is no different from anyone else. It's the concertmaster's job to set the tone for behavioral, as well as performance, excellence – and take action when needed, not an easy task amongst peers and colleagues.

Ability to create and mark bowings

Whether or not the conductor is consulted regarding bowings is up to the conductor. That means, in many cases, it's up to the concertmaster to determine and mark the bowings, ensuring every string player has a clean copy available before the first rehearsal. In addition to bowing proficiency, this also requires an exceptional musical sense so the bowings reflect the intention and feeling of the composer, the particular time period, the genre, etc.

That being said, most professional orchestras have plenty of help on-hand to copy predetermined bowings to each relevant part so a concertmaster wouldn't have to do it all him/herself. In smaller orchestras or community/volunteer orchestras, however, this might not be the case, and you'll be one your own if you don't have a willing group of volunteers.

Must work well with conductors (and others)

You may have heard that conductors aren't always easy to work with due to intense and demanding temperaments. That is sometimes the case since the job description prioritizes musical passion, genius, and talent over-and-above people-skills. Even so, as concertmaster, you serve as the ambassador between the conductor and the orchestra. This can be particularly difficult if your conductor isn't the "warm-and-fuzzy" type, there are personality conflicts or if a new conductor enters the scene and handles things differently than the former conductor.

Regardless, it is also up to you to speak up on behalf of the orchestra if the conductor's instructions don't sit right, or seem appropriate, for the situation. For example, in another Strad article, concertmaster Catherine Mackintosh states, "We are specialists in early-music ...sometimes the conductors are not. They might ask for a bowing we don't feel is true to the spirit of the music, or be shocked at what they think of as a thin tone and will consequently ask for too much vibrato." When this occurs, the conductor may or may not take the concertmaster's recommendation; in the latter case the concertmaster must simply relay the conductor's instructions to the orchestra and let it be.

The first-violin position means being as comfortable playing solos as you are playing with the group. On the flip-side of that equation, you must model what it is to be a good orchestral member - willing to blend in with the group to create a unified sound. This requires the rare ability to balance great talent and confidence with humility and the spirit of collaboration.

Read an orchestral score and be willing to conduct

A concertmaster is the "assistant conductor," and must be willing and able to step in on a moment's (or second's) notice. Thus, the ability to expertly read an orchestral score, become familiar with it "just in case" and have the ability to conduct the piece are all essential to the role.

Do you have what it takes to become a next, great concertmaster? We wish you the best of luck and look forward to hearing you in action.