Published by StringOvation Team on February 23, 2018 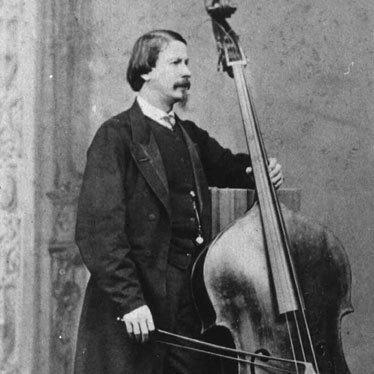 Giovanni Bottesini is often called "The Paganini of the Double Bass." A composer and conductor, he was one of the earliest virtuoso bassists. Alas, like his instrument, this Romantic-era, Italian composer and musician can often be overlooked in favor of various violinists.

It's time to rectify this oversight. You don't need to be a bassist to appreciate what Bottesini contributed to classical music and the craft of the strings musician.

Bottesini was born in the Lombardy region in 1821, which was then part of the Austrian Empire. He was introduced to music at an early age by his father, who was a clarinetist and composer himself. Like many young music students of his day, he began by singing in the local choir. His earliest instruments were the timpani and violin.

He may have stuck with violin, but Bottesini had a practical side, even at a young age. He read that the Milan Conservatory offered only two scholarships: one for the bassoon and one for the bass. So, he chose to learn the bass in double-time in order to earn the scholarship, which he did. While at the Conservatory, he studied with Luigi Rossi (the famous bass music teacher, not the Baroque composer) who felt a keen duty to teach and mentor talents like Bottesini.

In four years, Bottesini was graduated from the Conservatory in 1839 with 300 francs in his pocket after having won a performance prize. He used his winnings to buy a Giuseppe Testore bass with only three strings. Using this bass, he made his debut at the Teatro Comunale in his home town of Crema just one year later. He was well-received, which led to further engagements throughout Italy. He also took the position of principal bassist with the Teatro San Benedetto of Venice.

Finding fame as a bassist?!

His performance schedule as a bass musician quickly took him well beyond Italy. Bottesini was principal bassist at the Teatro Tacón in Havana, Cuba. His first opera, Cristoforo Colombo, debuted there in 1847. He went on to tour the United States in the 1840s. He arrived in New Orleans to great acclaim. He continued his U.S. tour up into New York. Bottesini was such a hot property of the time that a jeweler made a lot of money selling a pin designed around the bassist's likeness. That's the 19th century equivalent of having your own line of sneakers. It's unclear if Bottesini ever saw a dime off the pin.

By 1849, he was back in Europe, performing in London and meeting Giuseppe Verdi in Venice. The two became fast, lifelong friends. Verdi trusted Bottesini with the baton for the debut performance of Verdi's Aida, performed in Cairo in 1871. The Aida performance was hardly Bottesini's first time as a conductor. Verdi did get his friend into conducting, but much earlier, conducting in the 1860s in Italy. By 1871, he was conducting a full season of Italian opera at the Lyceum theatre in London, before his appearance in Cairo.

While trending towards mostly conducting and composing in the 1860s, Bottesini would continue to give audiences what they wanted by performing the bass during intermissions of operas he was conducting.

Finding immortality as a composer

While he had been composing operas and chamber music since the 1840s, Bottesini began to focus almost entirely on composing by the 1870s. It's this repertoire of bass pieces that he left the world which has maintained his reputation throughout the next hundred years and beyond. As the bass doesn't have a large repertoire, Bottesini's work is of particular value.

Check out this performance of Bottesini’s most famous and breathtaking composition, performed by principal double bassist Rinat Ibragimov of the London Symphony Orchestra, accompanied by pianist Catherine Edwards.