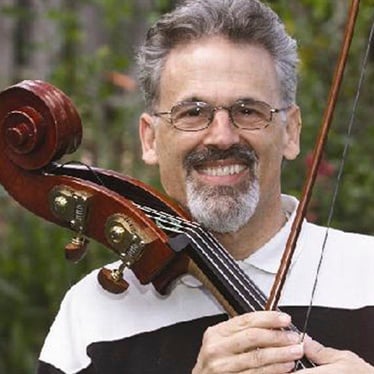 Pioneers are lauded and celebrated because they evince a courage, a vision, and an unrelenting determination to achieve something uniquely new. Their personal discipline and resolve enriches our lives by carving new frontiers for others to follow, and by generating new experiences that like-minded souls can emulate.

One such trailblazer, Gary Karr, paved the way by being the first solo bassist. Widely acknowledged as “the world’s leading solo bassist” (Time magazine), this premier musician has changed the way modern bassists view their profession and potential. His instrumental playing and teaching efforts over the years have established his lasting recognition and placed him among similar bass pioneers like Dragonetti, Simandl, Rabbath, Sperger, and Franke.

In this artist profile, we’ll examine the life and influences of Gary Karr, virtuoso double bassist, author, and pedagogue; sometimes referred to as “the Paganini” of the double bass.

Gary Karr was born in Los Angeles, on November 20, 1941. A seventh generation bass player, he did not receive much encouragement to pursue the instrument in a professional capacity, but that did not stop him from becoming the first solo double bassists to achieve this status. In a February 2001 interview with Rosemary Phillips, Karr stated that he grew up “surrounded by music” and due to the large nature of the instruments played, mentioned that his family “was the first in the neighborhood to have a station wagon” because they needed the room.

His early training under such notable instructors as Russian bassist Uda Demenstein, Herman Reinshagen with the University of Southern California, Warren Benfield at Northwestern University, and Stuart Sankey of the The Juilliard School, paved the way for his original career as a solo bassist.

During another interview at the University of Washington with bass professor Barry Lieberman for Contrabass Conversions, “An Afternoon with Gary Karr,” Karr explained his early impressions of the bass. He stated, “… I decided that if chocolate could sing, it would sound like the double bass.” And, considering the truly rich, luscious sounds he is able to produce on the instrument, the comparison is extremely apt.

Karr began his solo career playing with the Chicago Little Symphony in 1961. At age 20, an influential meeting with Maestro Marlin Wolfe in Aspen, Colorado led to televised performance the following month with the New York Philharmonic at Carnegie Hall with Leonard Bernstein. The appearance catapulted his fame as a solo bassist and earned him almost instant success. That was in 1962, and until his retirement from the stage in June of 2011, Gary Karr was constantly petitioned and welcomed in the most esteemed concert halls around the globe.

Shortly after his influential Young People’s Concerts appearance, Mrs. Olga Koussevitsky (the widow of Serge Koussevitsky, 1874-1951) gifted a beloved 1611 Amati double bass to Gary Karr. Some years later, Karr continued the generosity, creating the International Society of Bassists (ISB) in 1967, and the Karr Doublebass Foundation, a non-profit organization that loans exceptional instruments to deserving young musicians, in 1983. When he commissioned a new bass in 1995, (made from wood harvested entirely from British Columbia, Canada), he donated the Foundation instruments and the precious Amati, which was subsequently discovered to have been crafted around 1800, in France, to the ISB. It is now known as the Karr-Koussevitsky bass.

In addition to performing concerts with the world’s leading symphony orchestras and musicians, Gary Karr has made numerous recordings and guest appearances on various TV programs. Moreover, this lyrical master has earned a variety of coveted accolades and achievements, including:

Retired and living in British Columbia, Gary Karr is still actively involved with the double bass. During his years as an instructor, he has written many book and learning materials.

In 1996, he developed KarrKamp, which is a focused immersion in personalized bass training for 16 students each year. Conducted at the University of Victoria, participants spend an intensive four-weeks with Gary and Harmon Lewis (piano accompaniment) honing their bass playing skills. No matter the ability level, students from around the globe benefit from his personal instruction.

Truly an exceptional performer, Gary Karr is also a trailblazer, and his legacy will continue to bless bassists for many years to come.