Published by StringOvation Team on July 24, 2018 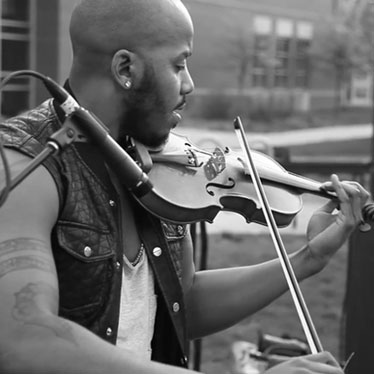 What do you think about when you envision the life of a famous violinist? Odds are, you don't picture American violinist Damien Escobar’s path. While many of the typical "professional violinist" boxes are checked – Julliard grad, multiple awards and becoming world-famous; there are plenty of other boxes that don't often make the list - inner-city origins, previously homeless, master of four-letter words.

That's because Damien is not your average violinist, and he's built his atypical career on a classical music foundation, plenty of passionate hip-hop inspiration and a wise, Phoenix-esque rise on a second-chance wave of fame.

In an interview with Frank Chlumsky, for Interview Magazine, Damien Escobar said, "Let’s be clear: they say it takes 10,000 hours to become good at something. I put my 10,000 hours in like a year – I used to come home and practice for eight hours, every single day. I had an obsession." And those 10,000 hours he's referring to were logged before he was 10-years old.

After a year playing violin, Damien was competently mastering Beethoven, at which point his school music teacher recommended auditioning for Julliard. His thousands of hours paid off via a graduation from Julliard at just 13-years of age.

The problem was all those hours, and all that hard-core violin training caused his 13-year old self to burnout. Damien still had to complete regular school and for a while he said, "No" to violin and "yes" to trouble.

After a few years of rebellion, Damien picked the violin back up and this is where his first-round of fame took off.

Bach, Hip-Hop and the Subway

In his later-teens, Damien and his brother, Torey, started playing their violins on the subway to make money. Damien played classical music on the C train on the Upper-West Side, while his brother took the A Train to Brooklyn and played hip-hop. Over time, the two formed the band "Nuttin' But Stringz," which rose in fame alongside multiple talent competition wins – culminating in their third-place win on America's Got Talent.  Watch their amazing final performance on America’s Got Talent from 2008.

Their merging of classical, hip-hop, and variations on other music genres allowed them to rise through the musical ranks, including appearances on Oprah and performing at Barack Obama's first inauguration back in 2009. Unfortunately, the pressure of their success and increasing tension between the two brothers caused the end of their band so they could each pursue individual paths.

You Can Only Go Up From Rock-Bottom

In 2012, Damien found himself 26-years old, a world-famous violinist and a multi-millionaire, but what sounds like a dream was his nightmare. In the interview with Chlumsky, Damien recalls, "When you start looking at the instrument as a commodity, and not as something that’s therapeutic – not only for you, but for other people – it becomes about, 'How much money can we make with this instrument?'"

At that point, Damien found himself utterly depressed. He quickly squandered his millions, and within seven months he went from living in a luxury condo to becoming homeless and sleeping on the same subway system where he'd been discovered. It was his rock bottom. The good news is that from rock bottom, you can only move in an upward direction.

The damesco.com bio honors the fact that, "it all needed to fall apart so he [Damien] could be forced to grow while putting it back together the right way." The "right way" involved unburying his talent and his true passion ­– the violin.

From this heartfelt, genuine root – Damien created his first solo album, titled "Sensual Melodies," which became his comeback project. It immediately garnered a following that launched his second wave of success, a wave he continues riding today.

Damien Defines Himself by Affecting People and Change

Today, money is nowhere near the focus of Damien's artistic lens. Sure, he admits that selling out concerts is nice, but it's nothing compared to affecting people and using your talents to make a difference in the world. In an axs.com interview, Damien explains the values that guide his life, "Did I do enough today that if I don’t wake up tomorrow I’d leave an impact on the world...Did I make an impact on the world today, did I do enough?"

His philanthropic gestures are many, including 100% funding of ready-to-implement school music programs and instruments – including violins which he designed to be especially appealing to kids.

Damien Escobar is proof that classical music is not the only means for violinists and other string musicians to reach untethered heights. He's also a reminder that musicians should always strive to keep their passion at the core of every note they play so their work better affects the whole as well as the individual.

Photo above of Damien Escobar performing in his video "Awaken" from the "I. Am. Me." Tour.