History Of The Acoustic Guitar

Published by StringOvation Team on January 08, 2018 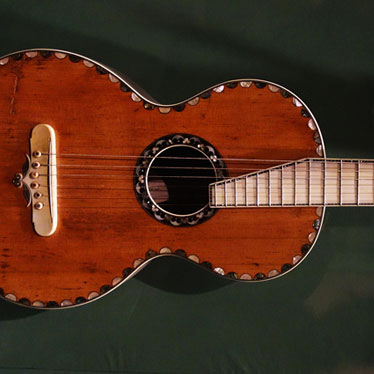 The guitar has multiple origin stories. Depending on who you ask, the guitar was born in any one of the regions in the ancient world, stretching from Greece to Persia. Perhaps it was born in all of them. Variations of stringed, plucked instruments are found all over the world, indicating that there’s a common human ingenuity and creativity that transcends cultures.

While versions of the instrument itself may have developed simultaneously in different regions, their names eventually converged around the Persian word tar, which means “string.”  So we have the kithara from Greece, chartar from Persia, sitar in India, and gittern, which dates to the late Middle Ages in Europe. From there, names like guitarra, chitarra, and guiterre popped up in Spain, Italy and France.

Development of the acoustic guitar in Europe

Because all these precursors to the acoustic guitar were so mobile, merchants and sailors from the ancient world brought them to Europe. Variations of the Persian chartar, a four-string instrument, are found in carvings and illuminated manuscripts throughout Europe dating from ancient Rome through the Middle Ages.

The earliest known guitar music was written for the four-string chitarra in Spain in the 16th century.  Instead of four single strings, the chitarra had four courses of string (a course is two or more adjacent strings that are closely spaced relative to the other strings, and typically played as a single string). The Italian version from the same period had five courses. These instruments also had frets, typically eight frets after the body.

By the Baroque period, many guitar styles had settled into a five-string course with movable frets. The repertoire of available music for the five-course guitar exploded. Master luthiers all over Europe were producing guitars, including Joakim Thielke in Germany and Stradivari in Italy, one of which can be seen in the National Music Museum in South Dakota.

In the late 18th century, the six-course vihuela a mano guitar from Spain was the primary style of guitar popular in Spain. A book on guitars from 1799 Spain described the standard Spanish guitar as having 17 frets with six courses. It was also during this time that the “waist” of the instrument became more pronounced.

Arrival of the contemporary acoustic guitar

Audiences today would recognize guitars from the early 19th century as ones used today, albeit smaller in overall size and with a smaller waist. However, the starting point for all contemporary guitars comes from the design of 19th century Spanish musician, Antonio de Torres Jurado. He adjusted the proportions of the guitar, giving it a more pronounced waist and broader body. He replaced wood pegs with mechanical ones. One of his greatest innovations was using fan bracing within the guitar’s body. The culmination of these changes was that his guitars produced a louder, richer, thicker sound than previous guitars could.  Due to the quality of the sound, luthiers from all over Europe began copying his design.

Eventually, Torres’ guitar made it to the United States by way of European immigrants. In the States, guitars were often strung with steel strings, which put a lot of pressure on the body, even with the fan bracing. In the 1830s, German-born American luthier Christian Frederick Martin, who designed the flat top guitar, designed an X-brace that could handle the additional tension from steel string vibrations. This design, with the tight steel strings that called for a pick more than fingers, gave rise to chord-based music in place of the elegant precision of the Spanish style of classical guitar.

For acoustic guitars, the flat top design remains the most popular style. Yet the archtop guitar, generally attributed to Orville Gibson, with its adjustable bridge and sound holes, produced an even louder, livelier sound. For this reason, the archtop guitar, whether acoustic or semi-acoustic, quickly became popular with country, jazz, big band, and rockabilly musicians.

Acoustic guitars remain the central instrument in contemporary, popular music. While in some ways the electric guitar has eclipsed its older brother, there’s still something irreplaceable about the sound of the acoustic guitar.