What Is A Film Composer And How Do I Become One?

Published by StringOvation Team on March 17, 2017 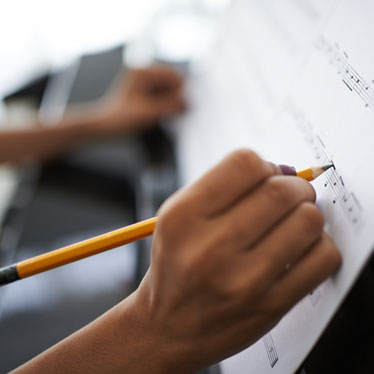 The narrative and emotional intensity a musical score gives a film is undeniable. All the most epic movie scenes have almost no dialogue, but move forward through powerful visuals buoyed by powerful musical scores. The film composer may not be the high-profile stars of the movies, but the movies would be deadly flat without them.

What does a film composer do?

The first point to understand about being a film composer is that scoring a film is a team endeavor. If you have visions of being a mad, solo genius composing feverishly in your studio – film composing isn't for you. Film composers work with directors, producers, writers and possibly even actors. So it's essential that you work well with other artistic personalities. You'll sit together as a team in "spotting sessions" to plot which scenes require background, scoring as well as:

The second critical point to realize is that film composers aren't telling their own stories. They're composing to someone else's vision and that vision controls everything. A film composer writes the score, which is the sum of all the original music going into a film. They'll demo pieces of the score regularly to the film's creative team for feedback on how it's fitting into the scene. Film composers are also responsible for the recording of the film score.

This isn't to say that film composers don't have their own voice. Having your own voice is critical to bringing something unique to the project. Yet, a film composer is expected to be versatile and reinforce the artistic vision of the director.

In the end stages of a project, the film composer again sits with directors and editors to insert the score into the film and create a final cut of the movie.

The rule of thumb is that a film will have roughly half its duration requiring background music. So a 90-minute film would typically require a 45 minute score. You can expect it to take anywhere from two to four months to score a film.

How do you become a film composer?

Well, it's not easy. Becoming a film composer is a highly competitive field. Composing film scores doesn't just get strong marks for glamour and compensation, which attracts a lot of people. There just aren't that many films made each year. The demand for film composers isn't great.

But someone is composing movie scores, so why not you? If this is really where your heart lies, be ready to put forth the effort.

Most of the well-known film composers already had established reputations in other musical fields before moving into film. You can go to school and get a degree in film composition, but most of these programs are master degrees. Thus it may be more worthwhile to get a strong background in music, music composition, as well as general liberal arts. A film composer needs a strong background in arts, history and culture so they can bring this sensibility and knowledge into their work.

Here's the point that is so obvious it's easy to overlook: Love movies!  If you don't love movies the way you love music, this is going to be a tough road. The people who'll hire you, directors and producers, are movie geeks. Think Quentin Tarantino. If they tell you they want a score with the knuckle gripping of the "Bullitt" car chase combined with the incongruence of a ”Kill Bill” scene, you should know what they're talking about.

Watch and learn about movies and moviemaking with the same intensity you give to music and composing. One place to start is with the great film composers; not to mimic them but to learn from them.

A film composer is also in sales (of yourself and your point of view), project management, and team building. Develop skills in networking, socializing, and time management. Networking will be a large part of how you find opportunities. You're not going to be able to network with the Hollywood bigwigs. If you could, you'd already have an agent.

Instead, work (for free!) and network with film students, budding filmmakers. Network with your peer group to get experience and build the relationships you'll need in the future. You'll also need the student film work to get the experience and demo tapes you'll need to make the leap into paid work. To do this kind of networking, you'll need to live in one of the movie capitals: Los Angeles, New York, possibly Toronto or London.