Music Genres That Help You Study

Published by StringOvation Team on August 22, 2018 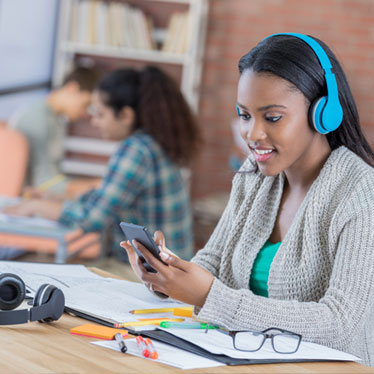 For all you students out there, listening to music while you study is as natural as breathing. Yet we don’t need science to tell us how greatly music can impact our moods, which begs the question: Do some genres of music facilitate studying better than others? Fortunately, science has been fascinated by this question, so we have some answers.

More accurately, forget studying to music that has words. Multiple studies out of Stanford University have found that listening to music with words distracts students who are trying to study. We only have so much brain power to work with at any given moment. Listening to song lyrics eat into the side of your brain that processes words, take precious brain resources away from processing the words and ideas you’re using to study.

Another study, this one from the Cambridge Sound Management, honed in on intelligible lyrics as the distraction. This study looked at office workers rather than studying. Even so, its finding that speech distracted nearly half the workers from their tasks is instructive. This finding is consistent with the Stanford studies in that if your brain isn’t processing the lyrics as words, it’s not working in the studying side of the brain. So perhaps listening to Nirvana’s slurry Smells like Teen Spirit or that old-school classic Louie Louie won’t undermine your studying at all.

However, if you’re looking for the music that advances your study efforts, rather than simply not undermining them, then music genres such as classical or meditative music are probably better options than singers with poor enunciation skills. Here’s a list of classical works recommended as valuable study aids.

Baroque may have just the right tempo

While classical music, broadly defined, is considered a good choice for study background music, not all classical music is equal to this task. Explosive works like Tchaikovsky’s 1812 Overture or Beethoven’s Symphony No. 9 may have too much energy for effective studying. Other studies on music and concentration have concluded that baroque music is a particularly useful study music. Since baroque music generally travels within 50 to 80 beats per minute, it "stabilizes mental, physical, and emotional rhythms," which creates a strong mental environment for studying.

Spotify has even created a baroque, 60-bpm “learning playlist” to help students out. The streaming music service likely chose 60-bpm as its target since other studies have isolated 60-bpm as the sweet spot of music tempos that correlates with “improved spatial reasoning, attentiveness, and concentration.”

We’ve already noted how meditative music, as a genre without lyrics, may be a good study option in addition to classical music. Studies focusing specifically on this genre have borne out this hypothesis. For example, this study found that meditative music, which contains what’s called “Alpha” beats, inspires Alpha waves in the brain. “Alpha” refers to a certain frequency range. Alpha waves put our brains in a relaxed state. However – and this is key – alpha waves inspire a state of alert relaxation, not sleep relaxation. Being relaxed and alert opens the brain to absorb and retain information and ideas.

Meditative music also commonly includes sounds of nature like running water or wind through the trees. Nature sounds improve cognitive function and concentration. They also efficiently mask other sounds that interfere with studying, especially other people’s conversations, addressing that whole “other words are distracting” issue.

One particularly interesting study on the correlation between music genres and studying demonstrates that a person’s individual preference may be a stronger indicator of the best studying music than any specific genre.

They compared the brain wave patterns reacting to different musical genres and a song selected by each study participant as a personal favorite. The researchers found that neural activity supporting cognitive processing improved when participants were listening to their preferred music, regardless of the genre. The researcher gave the game away in the title of their paper sharing their study results, “Network Science and the Effects of Music Preference on Functional Brain Connectivity: From Beethoven to Eminem.”

You’re probably already ahead of the game

We often drive home how learning an instrument provides so many benefits, including improved memory and concentration. Other studies also suggest that learning how to play an instrument can improve your IQ.

Regardless of whether you can eek out a few more IQ points, you can use music to make studying more enjoyable and more effective. These are some guideposts to help you select what music to use, but you know when you’re studying well and when you’re not. Try out some different works and find out what gets you in the studying mood.