What Do the Violin and Mandolin Have in Common?

Published by StringOvation Team on August 20, 2019 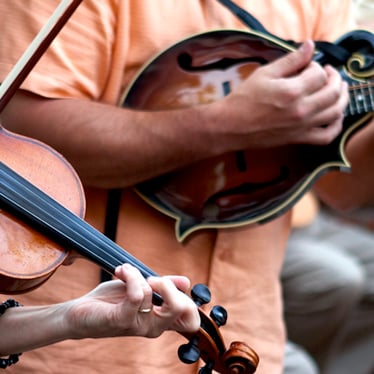 Being a multi-instrumentalist is a benefit in the music world. If you currently play the violin and are interested in branching out into other musical instruments or genres, it may be time to consider the mandolin.

In many ways, the violin and mandolin are quite different. The former is fretless, while the latter has frets. One is known best as a classical instrument, while the other is showcased in the folk and bluegrass worlds. What they do have in common, however, is tuning.

Both the violin and the mandolin are tuned EADG or GDAE– and this makes mandolins a fun instrument to play around on if you play the violin. Your left hand will feel right at home on the neck (after some adjustment in terms of size and width), and your brain will appreciate that the mandolin’s frets make it easier to play in tune – no need to “fret” about the fine-tuning aspect of fretless orchestra instruments.

That noted, the mandolin is a double-stringed instrument, so there are two strings at each position – part of what gives it the sweet, warbling or liquidy sound. As a result, the fingers of your left-hand must be set precisely to yield a clear sound, and this is where a violinists’ accurate techniques are strong assets.

Within a few minutes, you’ll recognizably play some of your favorite violin songs on the mandolin, and that’s a rewarding return on your time investment. Plus, it’s a good exercise for your brain to stretch its muscle memory even further, teaching your right arm/hand anatomy, posture, and movement entirely new playing techniques.

Both Instruments Cross the Classical-Folk Divide

In case you’re thinking a classical violin repertoire isn’t suited to the mandolin, we’d like to introduce you to Chris Thile. He is a member of the world-famous, Grammy-award winning bluegrass band, Nickel Creek, and the acoustic folk and progressive bluegrass quintet, Punch Brothers.

Even so, Chris is as likely to be found on a stage at Carnegie Hall playing a Bach Sonata as he is to be playing on stage at bluegrass concerts around the world. He is proof that the potential of folk and classical instruments is limitless, and that no one instrument is contained in a box of musical exclusivity. Below, hear him playing Bach’s Sonata for Solo Violin.

In an article on elbowmusic.org, violinist-and-now-mandolinist Ariane Todes writes, “…the first thing I played was Bach. Playing Bach sonatas and partitas on the mandolin is revelatory. No longer do you struggle with the voicing of chords...In the slow movements you get beautiful ringing chords, but never at the expense of the timing of phrases as is often the case when negotiating with the bow. In the fast passages notes hang in the air, pointing the harmonies in a totally fresh way. To witness how Bach can be invigorated on the mandolin…”

Contrast those examples with Thile’s playing in this next video, NPR's Tiny Desk Concert with the Punch Brothers. Pretty inspiring, isn’t it?

Playing the Mandolin Makes Your Violinist-Self Even Cooler

The good news is that artists such as Lindsey Stirling and Black Violin continue to break classical violins out of the “nerd box.” Even so, many teens and young adults have a hard time feeling that playing the violin is cool. Branching your inner-violinist out into the broader world of music genres is one way to accomplish that goal. Another way to make that leap is to learn to play other instruments.

Taking up the mandolin could be just the thing to make your classical musicianship feel increasingly like an asset rather than a deficit: “you play the violin and the mandolin? That’s so cool!” Similarly, your mandolin-playing self may become your ticket into a folk, rock, or bluegrass band – at which point your violin (potentially played like a fiddle) becomes a bonus of your band membership.

Find a New Way to Think About Your Violin

Yes, your left fingertips may get sore again from those double strings, and your right arm will need to do some new learning as it owns how to move, strum, and pick across the mandolin’s broader body and soundhole – but it’s worth it. Again, Ariane from elbowmusic.org, “Transferring the transferable skills I didn’t even realize I had has offered me new ways to think about my violin playing.”

Maybe it’s time you used the mandolin to learn what it has in common with the violin, and how stretching yourself into the realm of a new instrument deepens the relationship you have with the old one.