Get Public Performance Experience - Learn the Art of Busking (Safely)

Published by StringOvation Team on August 01, 2018 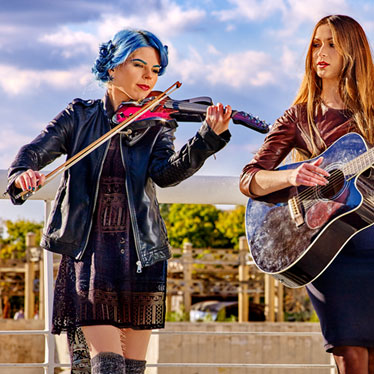 Busking – the art of jamming out on your instrument in public – offers musicians a performance opportunity like no other. First, you don’t need anyone to give you a gig – any time you want to play for a crowd, head out and do it. Some of today’s most innovative musicians have a history of busking.

The unique and unpredictable space and crowd create the ideal environment to test your performance and improvisational skills, which will only make you a better musician and performer regardless of the venue.

Of course, busking comes with some risks. While there are a lot of best practices to busking, especially if earning some cash is a main motivator, safety does come first. When you start to think about going public, keep these busking safety tips in mind.

Choose your busking spot wisely. Obviously, you want a well-trafficked area so you can encourage a crowd, but that also helps keep you safe. You don’t need to busk in some remote corner of a public park. If you’re going to busk in an indoor area or in the evening, make sure the area is well-lit.

Select the right spot at your location

Once you’ve selected the general location, say a subway station or public square, you then need to pick the exact spot where you’ll set up.  Pick a spot that has a structure behind you, like a fountain or a bench. You don’t want someone who thinks pranking the street musician would be fun to capture on video, to be able to sneak up behind you.

Take a look at this busker in a Chicago subway station. He’s sitting with his back right up against a pillar and he’s facing the inside, not the tracks. Double safety points.

Another spot selection factor to consider is to make sure you aren’t blocking the natural flow of foot traffic. You’re there to improve people’s day, not make it difficult for them to get where they’re going. This means staying clear of doors, stairs, escalators, and blocking pathways or sidewalks. Check out this cello student busking on a sidewalk. Her back is against the wall and there’s plenty of room for pedestrians to walk around.

Just for good measure, here’s a clip of Joshua Bell busking away from the doors in the subway station entryway:

Do some research into any local laws

Those of you busking in the United States, the good news is that as long you’re busking in a public place, the First Amendment has you covered.

Some localities have passed laws requiring busking permits or imposing other requirements, but the U.S. Supreme Court has consistently shot them down as unconstitutional. Busking is free speech and authorities can’t prohibit you from playing in any public place where they can’t regulate other forms of speech.

Keep in mind that being in public is not the same as being on public property. Privately owned businesses, while in public, are not public areas. You can’t set up shop in a café’s outdoor seating area if they own that stretch of sidewalk.

Also keep in mind that a locality may have laws about panhandling – which busking may fall under if you’re collecting money, or about selling merchandise on the street, if you’re thinking about selling some CDs or other merchandise. They certainly have laws regarding causing public disturbances or creating a public safety issue. As long as you’re performing solo and following the location/spot selection advice, you should be fine.

For those of you busking outside the United States, here’s an interactive map to busking laws around the world.

Don’t horn in on somebody else’s action

Have some professional respect and don’t set up in an area where you’ll be directly competing with another busker who’s already there. If people will be able to hear both of you at the same time as you perform individually, you’re too close. This doesn’t mean somebody “owns” a spot. If you notice someone busking to a crowd in a good spot, there’s no reason you can’t do the same in that spot another time.

This safety tip is mostly intended to shield you from some territorial buskers. Plus, local, regular buskers are their own small community that can be valuable to join. You may find some new creative opportunities and some safety in numbers if you decide to perform together. No reason to alienate them – and it’s just good manners.

Now, the scariest part of busking – getting up in front of a crowd and performing – that’s a separate issue. Bring some friends for moral support. Select some crowd pleasers and take the leap. You’ll find your performance skills growing in ways that simply aren’t possible without being in front of a crowd.