Published by StringOvation Team on August 22, 2017 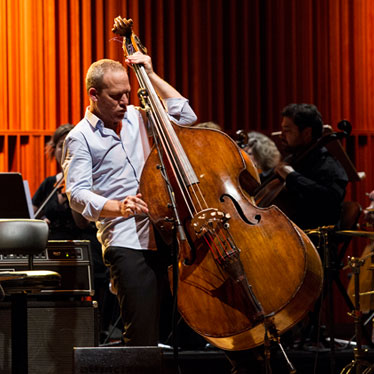 Avishai Cohen is a composer and bass musician who’s performed all over the world for nearly 20 years. Born on a kibbutz in Israel to a musical family with roots reaching back to Poland, Spain, and Greece, Avishai has developed a unique sound while constantly innovating.  One critic at the “Make Weird Music” website describes Avishai’s sound this way:

“Avishai’s music blends influences from blues, rock, middle-eastern, electronic, free-form jazz, minimalism, and many other genres. His lyrics span several languages because he feels that the sound of each language suits songs differently. He has a wonderful sense of harmony and makes heavy use of harmonic major and harmonic minor scales. In traditional jazz instrumentation, this kind of music has a very unique flavor.”

Wow. There’s a lot going on there. So how did Avishai get started?

Looking for that big break

Avishai began playing the piano when he was nine years old. At fourteen, his family moved from Israel to Missouri where he started to play the bass guitar in addition to piano. Two years later, he returned to Israel to attend the Music and Arts Academy in Jerusalem. While serving in the Israeli Defense Force, Avishai played in the army band. When he finished his army service, Avishai made his way to New York City in 1992.

In New York, Avishai studied bass at the New School and Mannes College of Music. He also played a lot of small clubs and gigs, while busking and earning extra money in construction. He was not the mythical overnight success. Earning a living at playing music during this time in New York was hard work. But he’s Israeli, which means he’s not the shy type. He gave a demo tape that he made to legendary jazz composer and pianist Chick Corea’s manager, when they both attended a music education conference in Chicago in 1997.

Chick liked his tape. So in 1997, after five years struggling in New York, Avishai got his big break. Avishai became an original member of Chick’s new acoustic jazz sextet, Origin. He was also invited to play with Chick in 2001 in the Chick Corea New Trio. His first four albums were released under Chick’s label, Stretch Records.

Avishai continued to play with Chick until 2003. That year, Avishai began his own record label, RazDaz Recordz. In addition to continuing to put out albums under his own label, Avishai accompanied, recorded, or performed with a wide variety of musical greats all over the world.

He’s played with Wynton Marsalis, Roy Hargrove, Ravi Coltrane, Paquito D’Rivera, Bobby McFerrin and Herbie Hancock. He’s been a soloist at concert performances with the Israeli and London Philharmonic Orchestras. You can catch some of his performance with the Paris Philharmonie here.

He particularly loves performing in multiple languages, mostly Hebrew, English, Spanish and Ladino, the language spoken by Jews expelled from Spain in 1492 and their descendants. His mother’s family came from Greece and Turkey, where Ladino was spoken – and certainly sung – in those Jewish communities. His album Aurora includes songs in all four languages, including a traditional Ladino folksong, Morenika.

Avishai put a new twist on the string quartet, creating the ensemble “Avishai with Strings.” The group includes Avishai singing and playing the double bass, along with Nitai Hershkovits, a pianist with whom he recorded a duet album, Duendo. Completing the ensemble are a violinist, violist, oboist, cellist and a drummer.

His latest album, 1970 (the year Avishai was born), released in 2017, is another iteration in his creativity. An electric rather than acoustic effort, Avishai creates a pop, more mainstream sound that includes the cello and oud, along with Avishai playing both acoustic and electric bass. As a new journey away from jazz, Avishai describes this album this way, “It’s not a jazz record. I don’t know what it is, but I’ve always had a connection to pop. I like pop as much as I like Bach and Charlie Parker.”

Are you excited yet by the idea of all the musical places you can go with a bass cello? Spend some time checking out Avishai’s music and you will be.