Published by StringOvation Team on June 04, 2019 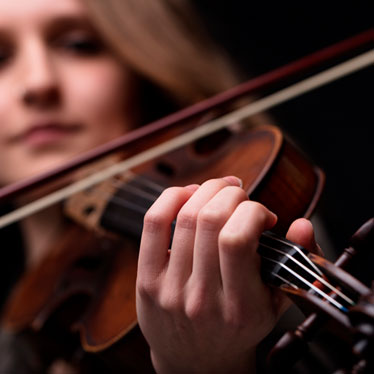 You love classical music. Not only for its beauty but for the challenge of learning to play it well. However, every so often, you feel like you're in a rut.

Why not explore learning to play a new musical genre? Learning new techniques and repertoire can expand your creativity and skills.

Folk music, by its very definition, is popular with a broad audience. It also often has an inherent emotional resonance. That's one reason why many Romantic composers have incorporated folk music into classical works.

Here's a primer on how the classical violinist can get started fiddling around with folk music.

Chances are you already enjoy folk music, or you'd not be considering how to play it. Listening for enjoyment and listening to learn a piece are two different exercises. Listen to a broad range of folk music with an ear to deconstructing the work and performing it. You'll soon understand why this intensive listening to play folk music by ear is valuable.

Next, "folk music" is a broad genre. What type of folk music do you want to learn? Celtic? Bluegrass? Klezmer? Cajun? These are only a small selection of the different kinds of folk music. Start listening and pick a sub-genre as your focus.

Understand the differences between a violin and fiddle

In many ways, the words are synonyms. A violin and fiddle have the same body and neck. The differences manifest in the changeable parts of the violin and the technique.

For example, folk music doesn't often seek the long, smooth tones familiar in classical music. No glissandos here. Instead, folk music is replete with pickings and staccatos. Thus, "fiddles" often have a flattened bridge, which allows the musician to play multiple notes at once.

The more aggressive bowing technique of folk music demands a sturdier string. Rather than the synthetic strings on a violin, fiddles are strung with steel core strings. These strings also produce a bright timbre that's a hallmark of folk music.

Impact of the cultural history of folk music

A significant difference between classical and folk music is how each is created and written. All classical music is scored, including ornamentation. In contrast, folk music's history is as an oral tradition. One generation taught the next folk music through playing, stories, and repetition. Folk music has only recently been scored.

Yet, scoring folk music fails to capture one of its critical elements: improvisation. Interpretation is a vital creative element of a classical music performance. The conductor or soloist drives the interpretation that's followed by the rest of the orchestra. Rehearsals iterate to perfect execution of that interpretation. In contrast, folk music delights in improvising and personalizing around the underlying material.

Let's return to why listening with a learner's ear is critical to learning to play folk music. The best way to learn how to play this genre is by using its original teaching technique. - pick a tune, listen to learn to play it by ear, and then give it a go!

In addition, much of folk music's origins is as dance music. As such, rhythm plays a large role. Composer Ailie Robertson decries the common perception of folk music as rhythmically simple. She explains:

"Superficially, traditional tunes are divided into time signatures with regular beats reflecting their function as dance music. However, one need only look at the rhythmic pushes and pulls of both ornamentation in dance tunes and the highly nonmetrical style of the singing tradition to realise that the underlying rhythms are very complex.

You can see how bowing technique plays a huge role in playing folk music. You don't need to hold your bow differently, but you will use it differently. Watch renowned "fiddlers" to see how they manipulate the bow to create a specific sound or dynamic. Copy what you see them do as a baseline to developing your style and sound.

Old school folk music fiddlers tend to use their voices while playing. It's why you'll see them holding the fiddle a bit lower than classical violinists. Check out this clip of Cajun fiddler David Greely and how he's able to move his head and sing without disturbing his fiddle hold.

Is there a fiddler who piqued your interest in learning to play folk music? Who was it? Let others know what folk songs and performances they should check out for inspiration.