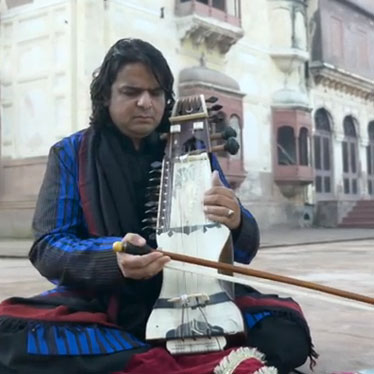 So enjoy this good introduction to some of the key bowed stringed instruments from the Indian subcontinent.

In comparison with other instruments, the esraj is a relatively young 300 years old. It, along with its close cousin the dilrubai, derive from the slightly older taus. The taus was developed during the early 17th century by a Sikh guru. It had anywhere from 28 to 30 strings stretched along a wooden neck with metal frets.  The esraj and dilruba are smaller versions of the taus. The esraj and dilrubai have 20 metal frets with only up to four bowed strings, not all of which are played at once. The remaining 12 to 15 strings are sympathetic strings that reverberate only in reaction to the bowing of the played string. The dilruba typically has more sympathetic strings than the esraj and thus, is slightly larger.

While the esraj and dilrubi are similar, the esraj is more popular in the West Bengal region and used as an accompanying instrument in folk and religious music. The dilrubi is found in the northern Punjab region where it’s used in Sikh religious music.

Visually, the sarinda will look a bit similar to a lute or violin, although the proportions of the parts of its body are quite different. Not only do the cut-aways create a more exaggerated curve, but the rounded, depth of the body distinguishes the sarinda from a violin. Think a combination of the rounded, depth of a lute with the topically curved body of a violin. Here’s a nice side perspective of the sarinda being played. The specific proportions of the sarinda can vary to create different sounds, much like the violin family. Sarinda, which are found from Pakistan to India to Nepal, can have anywhere from three to 30 strings.

The sarangi is a short-necked, almost rectangular bowed instrument.  The neck and the soundbox have almost the same dimensions. Yet inside its small, boxy body, there are three hollow chambers made of different materials which combine to create the unique sound of the sarangi. The neck doesn’t have any frets and is large enough that the entire hand is used to create pressure and tension on the strings, rather than just individual fingers.  The sarangi is common to northern India. It began as a folk instrument, but eventually found its way into Hidustani classical music as well.

This bowed instrument has a long history and was found in royal courts during Medieval India, dating back as early as the 6th century. This bowed instrument is found as far south as Sri Lanka and as far north as Rajasthan. It has a small soundbox, originally made from a coconut or gourd. Its neck is long and narrow, made of bamboo or wood, and may have up to four strings. The performer holds the soundbox of the ravanahatha close to the body, while the neck of the instrument juts out almost perpendicularly.  The instrument is popular with street musicians in India today.