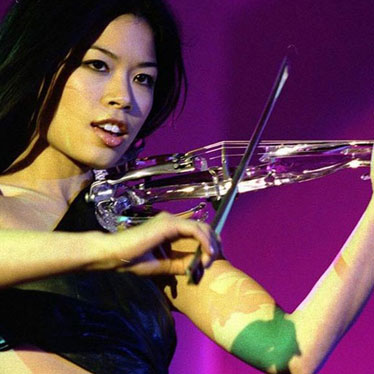 As we wind up our month long celebration of the versatility and beauty of the violin and particularly those modern masters whose talents best represent and bring forth those qualities, our final artist really exemplifies a 21st century sound.

Over the past decade Vanessa-Mae has managed to both raise eyebrows and delight audiences around the world. A child prodigy, her self-styled “techno-acoustic fusion” blends classical, jazz, and pop music techniques to create a distinctive style that is all her own.

Born October 27, 1978 in Singapore, Vanessa-Mae (Vanakorn) Nicholson began her music education at the tender age of three, with the piano. Her and her mother relocated to London shortly thereafter, and by age five, she began her classical violin training. In addition to studying at the Francis Holland School in London, she also attended London’s Royal College of Music and made her professional debut when she was nine years old.

Classically trained and widely acknowledged as a prodigy, she made many appearances on British television. By the time she was ten, she’d performed at the Schleswig-Holstein Musik Festival in Germany and played her first concerto with the London Philharmonia Orchestra. At age 13, she earned a Guinness World Record for being the youngest soloist to record Beethoven’s and Tchaikovsky’s violin concertos.

Vanessa-Mae began her career at a very young age. By the time she was 14, she began working on the album that would electrify audiences later, “The Violin Player.” Rather than continue to pursue a strictly classical genre, she started exploring with other music styles and experimenting with ways to incorporate classical disciplines with more contemporary music.

The result was her release of “The Violin Player” in 1995. Unlike anything she had previous recorded, the album was met with overwhelming response. She burst into the pop music scene with an album that blended classical and pop to create compositions that appealed to listeners of all ages, but especially the younger generation. “The Violin Player” stayed on the UK charts for 21 weeks and peaked at #11. Something about her energetic, passionate playing combined with her stunning good looks and over-the-top costumes struck a chord with listeners and launched her pop stardom.

In addition to the Tchaikovsky/Beethoven album, Vanessa-Mae released a record of Kid’s Classics as well as her first album “Violin” all before she was fourteen, but since then, her recordings have become a reflection of her personal style. “The Violin Player” was also the first album she released on the EMI label. Since then, she has released:

China Girl: The Classical Album 2—China Girl was the seventh album by Vanessa-Mae, (1997) and it contains only three tracks: the Butterfly Lovers' Violin Concerto performed with the London Philharmonic Orchestra, Violin Fantasy on Puccini's 'Turandot' performed with The Orchestra of the Royal Opera House.

Here are just a few of her performances:

In addition to playing with renowned orchestras and pop icons like Prince and Janet Jackson, Vanessa-Mae loves to ski, and competed in the 2014 Winter Olympics. Other fun facts from her official website include:

Vanessa-Mae has done just that. By incorporating her own unique tastes and passions into her playing, she has become a violinist who is able to transcend music genre barriers to develop a twenty-first century sound that resonates with her listeners, making her one of today’s undisputed modern masters of the violin.