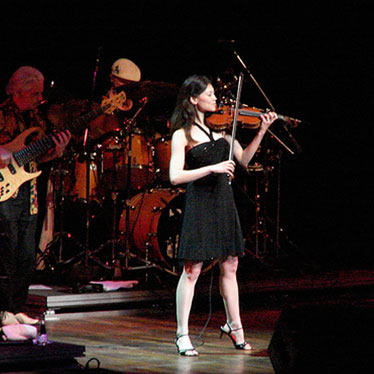 Being passionate about what you do is important for success. As we continue to explore modern violin masters this month, our next artist has proven that fact. Anne Marie Calhoun has received international acclaim as a virtuoso, composer, and vocalist, becoming a highly sought-after musician among music industry giants because of her energetic artistry and incredible talent.

However, there’s much more to this artist than her elegance, amazing talent, and stage presence. Calhoun’s success is driven by her desire to reach new heights in her personal achievements, developing and applying her gifts in new ways and in uncharted territories. It’s this outlook that has allowed her to showcase her talent across a variety of musical genres.

Born May 26, 1979 in Gordonsville, VA., Anne Marie Simpson (Calhoun) grew up surrounded by music. Her mother, a classically trained pianist, and her banjo-player father encouraged music training at a very young age for all of their children. She began her classical violin education at the age of three, stating in a 2007 Facetime interview that, “I actually don’t remember learning how to play… I feel like I’ve always known.” Indeed, her talent was recognized very soon. While watching a football game with her father when she was four, after hearing the band play the team fight song, she immediately reproduced it on her violin. In a 2008 Washington Post interview, her father said, “She picked it up through her ears, and it came out through her fingers instantly.”

This gift helped Calhoun excel in music throughout grade school, and also support her passion to play all types of music. After learning her first minuet, she recalled her dad’s excitement to teach her some “fiddle tunes” in an article she wrote for the University of Virginia Arts and Science Magazine in 2006. Delighting in the contrasting music styles, she explained that from then on, she began to supplement her formal training with “fiddle lessons” from her father.

Calhoun attended Lake Braddock High School, and as a teen she earned a youth fellowship with the National Symphony Orchestra, which provided the opportunity for her to take lessons from violinist William Haroutounian. Later, as a student at the University of Virginia, she double-majored in Music and Biology, and employed her bluegrass talent in various bands, graduating in 2001.

However, before she embarked solely on a music career, she spent five years teaching conceptual physics and chemistry at Woodbury Forest School in Virginia. Speaking in an October 2006 interview with Let It Rock, Calhoun explained that “No matter how hard I keep trying to become a professor, music keeps calling me away… I realized that I needed to take time to explore music.”

And thankfully, she did.

As a rock violinist, Calhoun has performed on tour with Ringo Star, Yanni, Jethro Tull, and Dave Stewart of the Euthrymics, and other notable performers; and her recording career has encompassed a variety of music genres, playing with some of the world’s greatest musicians. In 2009 she worked with Hans Zimmer, performing the solo work and helping compose the original score for the film Sherlock Holmes, which was nominated for an Academy Award; and her performance at the 50th annual Grammy awards with the Foo Fighters capped her win of the “My Grammy Moment” contest in 2008. View it here, or check out this violin performance of Calhoun vs Samvel Yervinyan, showcasing their talent.

Calhoun is currently playing and contributing to the band SuperHeavy with Dave Stewart, Mick Jagger, Damian Marley, AR Rahman, and Joss Stone. However, it’s her unique ability to retain the elements of classical execution with modern styles which has earned her a reputation for excellence. Here’s what her peers say:

Anne Marie Calhoun exemplifies how a great passion for music can transfer into international acclaim. This virtuoso has earned her place as one of today’s most influential rock violinists because she combines her talent and her passion in versatile ways, delivering music that speaks to the soul.