Friday Night Lights: What To Do With Your String Players in a Marching Band

Published by StringOvation Team on November 24, 2017 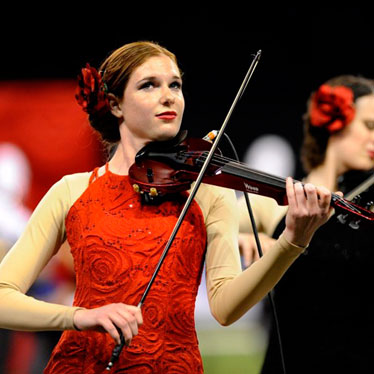 From small schools and spending cuts, to band directors who think outside the box - as a music educator you may find yourself adding string players to your marching band.

While this isn't the norm (yet!), there are fun, creative, and downright impressive ways to integrate strings into a band typically known for its abundance of brass and snare drums.

Tips For Adding String Players to the Marching Band

Here are some ideas for incorporating string players into your school's marching band - ranging from the cultural to the practical.

Embrace uniqueness and live in the eclectic

If nothing else, we live in an era when traditional ideas and/or constructs are questioned, analyzed, and turned upside-down. Whether it assaults your classical approach to music or not, the idea of adding strings to a marching band can seem oxymoronic as the two have seemingly little in common.

Take a step backwards, however, and there are a number of concepts shared between orchestral musicians and their marching band counterparts:

By embracing the addition of strings in a marching band - your students and band(s) benefit from the modeling that everyone has a place and that all instruments are versatile.

Of course, not all pieces are easy to play while marching - particularly if you play the cello...or bass. As a result, some integrated marching bands find it helpful to create marching formations with a strings-seated section in locations that complement the theme, shapes or motion of the choreography. This way, strings players remain still, continuing the postural and musical techniques they've worked so diligently to achieve.

Meanwhile, traditional marching band members march, shift, and create formations around the seated or still string players. This approach is helpful for the beginning phase of your marching-band-gone-strings, allowing the group to baby-step into bigger concepts over time and with greater experience.

Another way to help your string-section-gone-marching-band is to ensure string players' movements take place sans playing - or with minimal playing (plucking, perhaps?) - so their performance isn't diminished by required movement. For inspiration, watch this video of the Goshen High School Crimson Marching Band, who've been known to implement strings and other orchestral instrumentalists into their half-time routines.

While seated positions are a good place to start, there are marching bands with string players who walk, march and move in formation with the rest of the band. The Rice University Marching Owl Band (MOB) is one of the most famous of these.

To facilitate moving with the band, cellists benefit tremendously by outfitting their instruments with harnesses. Unfortunately, bass players benefit most from strong arms - so you might need to begin some type of weight training. Otherwise, a wheel end pin or a bass buggie are good options.

As you can imagine, strings get drowned out quickly by louder brass and percussion instruments. Thus, string players in a marching band must use a variation on their typical playing techniques to achieve bigger and louder sounds. This includes things like:

If funds or local music store donations allow - look into electric string instruments or those that can be plugged into an amp. Sometimes, music stores are so excited to hear about this new twist on the old marching band, they're more than willing to donate resources to your cause in order to get in on the notoriety.

String instruments aren't known for their weatherproof qualities so it's helpful to assemble a donor instrument collection. These are the instruments used outdoors and/or when weather is inclement.

Donor collections can start via contact with local music stores but running social medial campaigns to acquire unused, community string instruments can have surprising results. Also, students/parents ready to invest in a higher-quality instrument are often willing to contribute their used instrument to the donor collection.

The Rice University MOB band have high-quality kazoos in their pockets. If the weather is too extreme for their string instruments, they whip out the kazoos and start humming their parts. When added to the other band sounds, this is remarkably effective at maintaining the resonant, string instrument sound.

Creativity and ingenuity are wonderful attributes for music educators to cultivate - and both are essential when you're ready to incorporate string players in the marching band.