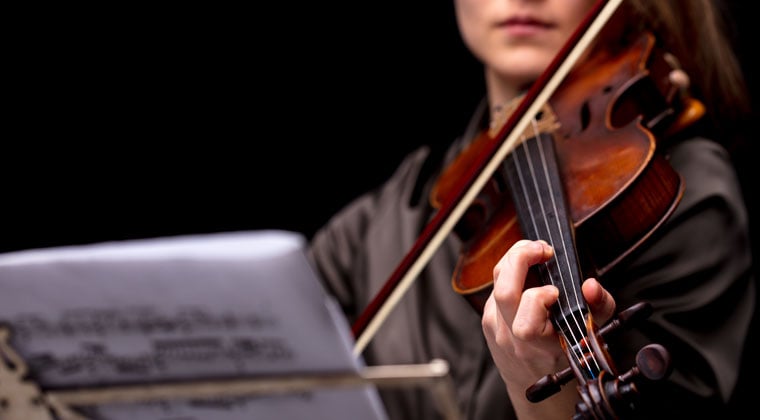 13 Popular Compositions for Fiddling Around

The best way to learn to play the fiddle is the traditional way people have long learned – by listening to the music and figuring it out by ear.

Maid in the Meadow is a quadrille and classic Irish tune. You can find sheet music for it here. Here's a version of it played by Yvonne Casey.

Here's a fiddle and flute duet worth trying to figure out. We can't tell you the name of the tune, but the locals seem to enjoy it.

Sally Goodin (also Sally Gooden) is categorized as both "Old Time" and Blue Grass. Fiddler Eck Robinson's recording of it in the 1920s is the subject of one of the Country Hall of Fame in Nashville. Here's a fiddle tutorial video

Cotton Eye Joe is an excellent option if you want quickly master a high tempo classic.

Not everyone agrees that "Old Time" and Blue Grass music are the same thing. Either way, here's a couple undisputedly Blue Grass tunes to try out.

Blackberry Blossom is a Blue Grass fiddlin' classic and variations of it have been used in over 250 songs. This video tutorial is for intermediate violinists.

The Big Sandy is relatively new, written in 1963. The Big Sandy of the title refers to the river that forms part of the border between Kentucky and West Virginia.

Klezmer is the folk music of Ashkenazi Jews. While its origins are murky, it dates back at least to the 15th century. It shares a musical sensibility with Romani music as both communities lived closely together throughout Eastern Europe.

Here's an original composition by Daniel Hoffman that includes some classical Klezmer formulations for Jewish folk dances, the hora and doina. It's a mid-tempo tune that will challenge your play-by-ear skills.

If you want a little help, you can find free sheet music for some Klezmer music here.

Back in the day, Gypsy and Klezmer musicians often traveled around Eastern Europe together, which is another reason the musical styles share many characteristics.

Czardas was composed in 1904 by an Italian and the title refers to a Hungarian dance. This piece had been recorded and performed by a wide range of violinists. Here's David Garret's version, backed by with the Filarmonica de La Scala Milano.

Djelem Djelem is the Romani national anthem. The lyrics were written by Romani Holocaust survivor Žarko Jovanović after World War II and set to a traditional Romani tune. The version below is a quartet of two guitars, a violin, and double bass, so you can really get a taste of the fiddle. However, there are fantastic ensemble versions where you can hear the lyrics and that also make greater use of the double bass players.

Cajun music is native to southern Louisiana but has its origins in what's now eastern Canada. The Acadians migrated south in the 18th century, and the folk music they brought with them continued to evolve, influenced by Creole music, into modern Cajun music. Cajun is heavy on the accordion, but the fiddle plays an important role too.

Jolie Blonde (also Jol Blon) is probably the most well-known Cajun song outside of Louisiana. Here's a version as a violin duet.

Port Arthur Blues was popularized by the "Godfather of Cajun music," Harry Choates, but was initially recorded as "La Blues de Port Arthur" by Leo Salieau in the 1920s. Here's an ensemble version with the violinist up close so you can watch what's doing.

You can sheet music for Port Arthur Blues and other fiddle tunes here.

Any classics we missed that you think we should include? Let us know what your favorite fiddle tunes are or what fiddle tunes you want to learn more about.