Published by StringOvation Team on February 13, 2017 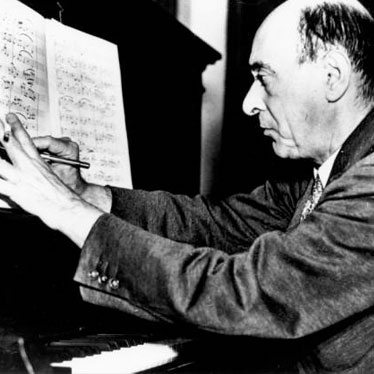 Whether you enjoy his music or not, there is no doubt that Arnold Schoenberg (1874-1951) evokes emotion. The work of this twentieth-century composer and conductor is widely hailed as the progenitor of a radical renovation in modern classical music. His early development of atonality and the latter 12-tone method of composition (a.k.a. serialism) was a turning point in the music timeline, bridging the gap between late Romantic Period style and modern musical expression.

The following amazing facts about Arnold Schoenberg may help you to appreciate why this artist aroused such violent feelings in critics and audiences. Gleaned from his Encyclopedia entry, Fact File, The Famous People record, and his biography at the Arnold Schoenberg Center in Vienna, which is dedicated to his life and work, these facts uncover the genius behind this quintessential modern artist.

"As a child of less than nine years, I had started composing little, and later large pieces, for two violins, in imitation of such music as I used to play with my teacher or with a cousin of mine. When I could play violin duets of Viotti, Pleyel and others, I imitated their style."

Arnold Schoenberg lived his life in the pursuit of his artistic expression. Although his music was largely misunderstood, because he persevered, his inspiration altered the course of classical music composition. Learn more about this incredible artist by visiting the website for the Arnold Schoenberg Center, or if you can, visit it in the beautiful city of Vienna.