Published by StringOvation Team on May 01, 2017 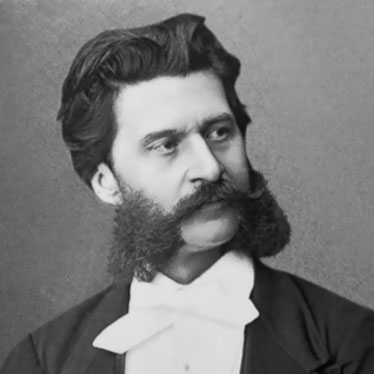 Johann Strauss is most well known as the composer of the world's most famous waltz "The Beautiful Blue Danube." While any musician would be thrilled with the recognition such a piece gives its author through the centuries, there's a lot more to know about Johann.

First off – he had a lot of names. Since his father, also named Johann, was also a famous composer in his time, people needed a way to distinguish between the two. The younger Strauss was also known as:

Johann (as we'll call him here) probably liked this last one the best. Johann had serious Daddy issues (you'll read more about that below), so having names that kept him in position junior to his father wouldn't have pleased him. He admired his father's work, no question. But his father was known as the "Father of the Viennese Waltz." A great accolade to be sure, but that's no "Waltz King."

Here are even more interesting facts about Johann.

Johann was born in 1825 in Austria. His father wanted Johann to be a banker. He didn't want to compete with his own son musically. Johann was secretly taught violin by one of the violinists in his father's orchestra and was beaten by his father when the truth came out. In fact, Johann wan't able to focus on music until Strauss Sr. left the family for good when Johann was 17.

By age 19, Johann started his orchestra to compete with his father's. Unfortunately, since his father was so highly regarded, it was hard for Johann to find any gigs. He finally got the Dommayer's Casino in Hietzing, a suburb of Vienna, to hire his orchestra. (His father refused to play that club ever again.)

The tension between father and son wasn't just musical. Austria was going through some political convulsions in 1848. Each Johann picked a different side. Johann supported revolutionaries against the monarchy, while his father was a staunch monarchist. Johann was arrested for his public performance of "La Marseillaise," the anti-monarchist anthem of the French Revolution (and current French national anthem).

As a result, Johann's father actively worked to prevent his son from receiving Vienna's highest music honor, Music Director of the Royal Court Balls (KK Hofballmusikdirektor). The honor had been created for Johann the Elder, its first recipient. Johann was denied this honor multiple times until 1863, well after his father's death.

Fortunately, Johann had other family relationships that were more supportive. His mother was an amateur violinist who helped him sneak in music lessons while his father prohibited them. Johann's two younger brothers, Josef and Eduard, were also composers and conductors (against their father's wishes). Josef took over conducting duties at the Strauss Orchestra for six months in 1853 when Johann was terribly sick. Eduard, the youngest of the three, kept the Strauss Orchestra going for a couple of years after Johann's death.

As for the ladies, Johann was married for 16 years to singer Henrietta Treffz. She also worked as his business manager and encouraged him to get into popular music. Johann was so distraught after Henrietta's death in 1878, a mere six weeks later he married a much younger actress named Angelika Dittrich on the rebound.

Eventually, Johann was so eager to be rid of Angelika. He left both the Roman Catholic Church and his Austrian citizenship as the local authorities refused to grant him a divorce. Rather than stay in a marriage he no longer wanted, he left Austria and became a citizen of Saxe-Coburg-Gotha. Divorced, he married Adele Deutsch in 1887.

Johann was an artist lucky to be adored in his lifetime. One story has it that Johannes Brahms signed Adele's fan with a few measures of the Blue Danube with the note "Unfortunately, NOT written by Johannes Brahms."

Strauss’s music was also very much revered by the Nazis — who worked hard to bury the fact that Johann's great-grandfather was a Hungarian Jew.

He was commissioned to compose the piece that would become the Blue Danube in 1865, but war with Prussia postponed things. Thus Johann wrote the piece post-war when Vienna was bankrupt and defeated. He took the opportunity to lighten things up a bit with his frothy waltz inspired by a poem of Karl Isidor Beck called, you guessed it, Beautiful Blue Danube.

The Blue Danube was a total flop when first performed in 1867. The audience hated the lyrics. Never one to give in to defeat, later that year at the Paris International Exposition, Johann performed it as an instrumental piece and it became a smash hit.

Johann made his American debut in 1872 as part of the The World Peace Jubilee, an event with more than 2,000 musicians and 20,000 singers. Today, he and his music remain favorites all over the world. The Johann Strauss Orchestra, a modern incarnation of his own Strauss Orchestra, was established by world-renowned violinist, Andre Rieu, in 1987.