Published by StringOvation Team on October 08, 2021 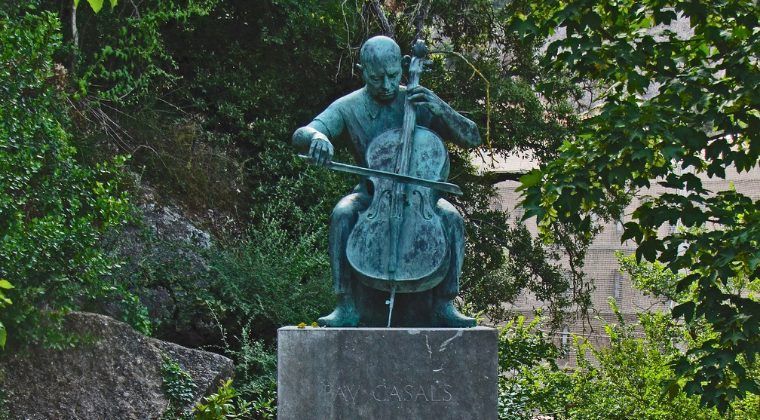 Over the years, we've referenced, honored, or quoted cellist Pablo Casals in more than 14 different posts — including our list of The Top 7 Cellists of All Time. We also highlighted why he continued to practice every day (even in his 90s) in the post 5 Habits of Celebrity Cellists (we'll tell you what he said later).

Pablo Casals is also revered as one of the most magnificent musicians because he had a generous heart and spirit. He set the platinum standard for what it means to live music as a sacred practice. Moreover, his tangible, heart- and human-centered energy garnered a Nobel Peace Prize nomination in 1956, "For his work as an artist and humanitarian."

On December 29, 1876, Pablo was born in a small village called El Vendrel in Catalonia, Spain, about 45 miles outside Barcelona. Pablo's father was a talented musician and choirmaster who played the piano and organ, and he also served as Pablo's first music teacher. By the age of five, Pablo was an accomplished musician on the piano, flute, and violin. He was also singing in his cathedral choir as a second-soprano.

Did you know that Pablo's father refused to let him play the organ until his feet could touch the pedals? Once he could, "accomplished organist" was added to his instrument roster. Then when Pablo was 11, a band of traveling musicians came to his village — one of whom played the cello. The adolescent was immediately captivated. He recalled, "I had never seen a cello, and it was so wonderful to me. The sound was so profound, so human, and I said to my father: 'I want to play the cello.'"

While his father did not support his dreams of professional musicianship, feeling there was no way to make a living as a musician, his mother put her foot down and insisted that Pablo be allowed to pursue his dreams.

In 1888 at age 12, Pablo joined the Escola Municipal de Música, where he studied cello under José García. That same year, as the young cellist visited an old music store in his village, he came across a portion of a Bach Cello Suite. That momentous discovery changed the course of his life. Arguably, that chance meeting also changed the course of Bach's Six Cello Suites, which were being used solely as a practice tool for cellists until then.

Pablo said, "I was so astonished that Bach had written six suites for the cello alone. I was 12 and a half at the time. But I didn't play a Bach suite in public until I'd studied them for 15 years."

No Pablo, No Bach Cello Suites

What most people don't understand is that Bach's Cello Suites weren't always famous. And, what young musicians don't always realize is that it was Pablo Casals, not Yo-Yo Ma, who made them famous.

As an article from NPR states, before Casals performed them in concert, "...the suites weren't thought of as great works of music, or worthy of performance — they were too methodical, too logical, too cold. Cellists considered them exercises, a way to learn to play the cello better. But to Casals, they were music of the highest order."

In 1995, one of Pablo's favorite cello students, Madeline Foley, seized an opportunity to interview him about his style, technique, conducting, family, introduction to music, and miscellaneous memories. We highly recommend watching it on YouTube as it starts with him playing the cello suites.

Foley comments on how she's heard him play the suites so often, admiring how he expresses such variety each time, but asked: how is that possible?

Pablo replied, "Well, it must be different, and how can it be otherwise? Nature is so, and we are nature. The music and everything - everything changes. You see one thing in a way, and minutes after, you are different. So, art is nature. Art is movement. It's color. And, also, our impressions of Bach or any music changes continually...and this is why everything is new."

His Later Career and Accolades

Listing the entirety of Pablo Casals's career highlights and accolades requires far more space than a blog allows. For that, we recommend reading the biography Joys & Sorrows: Reflections by Pablo Casals, by Albert E. Khan. In the meantime, here is a quick bullet list (courtesy of Wikipedia):

1893. He plays for the Queen Regent of Spain, resulting in a royal stipend to play at the palace
1896. Appointed to the faculty of Escola Municipal de Música in Barcelona. He was also appointed principal cellist in the orchestra of Barcelona's opera house
1899-1903. Tours Europe and the United States
1904. Invited to play for the Roosevelts in the White House and also debuts at Carnegie Hall
1915. Releases his first of countless recordings
1916. Assembles a trio with pianist Alfred Cortot and the violinist Jacques Thibaud, and they continued to play and make recordings together for more than 20 years.
1919/20. He becomes a conductor and starts the Pau Casals Orchestra in Barcelona until the Spanish Civil War in the late 1930s. At this point, Pablo Casals refused to play in any countries that allied themselves with Spain or recognized the Spanish government.
1950. Resumes the conducting life in his chosen hometown of Prades (a small French town in the Pyrénées)
1950s and beyond. He begins composing music and teaching master classes (Watch him in action leading a Master Class here and here)

Pablo's compositions have been commissioned and played worldwide, including at the United Nations. He continues to be recognized as both a genius musician and a stellar human being. Unfortunately, in 1973, at 96 years old, Pablo Casals had a heart attack from which he never recovered. He died three weeks later in the Auxilio Mutuo Hospital in San Juan, Puerto Rico. In 1993, Casals posthumously received a Grammy Lifetime Achievement Award.

At the beginning of this post, we mentioned that Pablo Casals practiced music every day of his life, even into his 90s. We hope that his thoughts on the subject imbue in you that same level of passion and commitment:

"[Daily practice] is not a mechanical routine but something essential to my daily life. I go to the piano, and I play two preludes and fugues of Bach. I cannot think of doing otherwise. It is a sort of benediction on the house. But that is not its only meaning for me. It is a rediscovery of the world of which I have the joy of being a part. It fills me with awareness of the wonder of life, with a feeling of the incredible marvel of being a human being. The music is never the same for me, never. Each day is something new, fantastic, unbelievable. That is Bach, like nature, a miracle!"