Top 7 Classical Cellists Of All Time...And Why

Published by StringOvation Team on February 20, 2018 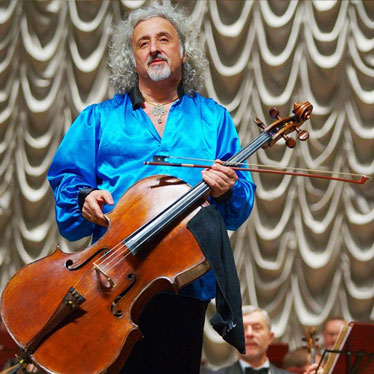 The thing about lists of the “greatest of all time” anything is that everyone will agree and disagree. Some names simply can’t be left of the list. People may argue whether Jordan or LeBron are the GOAT, but they’re always part of the discussion (for the record, the right answer is Michael Jordan).

Nevertheless, the list has to end somewhere. That means some talented, influential people don’t make the list. And that’s where the fun really begins. Here’s our list of the nine best classical cellists of all time…let the arguments begin! Make your case for who we left off in the comment section below.

He was there when the classical era began – not only as a cellist, but composer as well. His was known for a courtly performance style, yet distinct from what was heard in the major European musical centers. Boccherini was said to have an exceptional ear and fondness for long, textured passages.

His lasting influence is due primarily to his compositions, including over a hundred quintets. Instead of composing for two violins, two violas, and one cello, Boccherini’s quintets were composed for two violins, two cellos, and one viola. He also brought the cello lines to the forefront, rather than keeping them in a supporting role. In addition to the new style quintets, he also composed numerous sonatas and concertos for the cello. Thus he left a vast repertoire for future cellists to dig into.

Rostropovich is unquestioningly a giant of 20th century classical music and considered by many to be the century’s finest cellist known both for extraordinary technique and interpretative skills. Cellist Julian Llloyd Weber (himself an honorable mention on our greatest cellists list) described Rostropovich’s talent, saying he “made the cello 'speak' like no other. The secret lay not only in his phrasing but in his sound. Rostropovich cajoled his audience through his cello and its sound was filled with the breath of God.”

However, he’s known as much as for his relationships with the great 20th century classical composers as he is for his own musical skills. He didn’t compose a great cello repertoire like Boccherini, but he did inspire one. He maintained close relationships with composers like Britten, Prokofiev, Leonard Bernstein and Alfred Shnittke, who are just a few of the composers who wrote commissions for him or gave him a new composition to premiere. The list also includes one of his music teachers, Dmitri Shostakovich - check out this live performance of Shostakovich’s Cello Concerto No. 2 below.  Rostropovich also inspired subsequent generations of cellists by teaching and mentoring many of them, including the next member of our list: Pablo Casals.

Casals was probably the first cellist recording star.  Over 300 albums of his works have been released, covering everything from orchestral to chamber and solo works. His earliest recordings were made in 1915, although most of them came after 1950. He had a great recording career during the second half of his career because he was already a rock star during the first half the 20th century. Casals performed for Queen Victoria in 1899 and at the White House for President Theodore Roosevelt in 1904. He performed at the White House again in 1961.

He also took advantage of new technologies by having some of his many master classes, which he led all over the world, televised. Below you can see him playing  Bach’s Suite No. 1.

A child prodigy, Yo-Yo Ma is the most likely heir to Pablo Casals in terms of his popular celebrity and recording success. He was discovered by Leonard Bernstein, who had him performing at the White House for John F. Kennedy in 1962 when he was just 7 years old. He’s recorded over 90 albums and won 18 Grammy Awards, with many of his recordings fusing classical cello with other music styles, including Brazilian, Japanese, and Chinese, bringing the cello to new audiences the world over.

Listen to his 1997 performance of  Elgar’s Cello Concerto with Daniel Barenboim and the Chicago Symphony Orchestra.

Another student of Rostropovich, Maisky is known for his powerful, robust play – and his hair (as is another honorable mention on our list – British cellist Steven Isserlis). One fan at his United States debut (at Carnegie Hall in 1976) was so taken by the cellist that he anonymously gave him a Domenico Montagnana cello. Here he is performing Dvořák's Cello Concerto in B minor, Op. 104, B. 191 with the Warsaw Philharmonic in 2015.

Du Pré debuted at Wigmore Hall when she was just 16 years old. She quickly achieved popular celebrity, like Casals and Ma, well outside the classical world. Her playing style is described as an emotional, romantic style. Indeed, she was the muse for Alexander Goehr’s work Romanza for cello and orchestra, op.24, which she debuted in 1968 under the direction of husband, conductor Daniel Barenboim (Here’s the pair performing Elgar's Cello Concerto in E minor, Op. 85). Unfortunately, du Pré is as well-known for having her career cut tragically short by multiple sclerosis, as she is for her talent. Like so many others on this list, she studied under Rostropovich. Yet it was du Pré whom Rostropovich considered "the only cellist of the younger generation that could equal and overtake my own achievement.”

Hear her beautiful version of Dvořák’s Cello Concerto with the London Symphony Orchestra.

Schiff is an electric performer with daring speed and intensity. In fact, he had to half a live performance in 2010 due to shoulder pain. He’s never performed the cello since. Fortunately, we can continue to enjoy his interpretations, like this performance of Shostakovich’s Cello Concerto No. 1 in E-flat major, Opus 107. As dynamic as his own playing was, Schiff is as well-known for being the primary teacher of the newest crop of cellist greats, like Gautier Capucon and Natalie Clein.

Check out this 1986 video of Heinrich Schiff- playing Schumann’s Cello Concerto in A minor, Op. 129 with Christoph Eschenbach Conducting the Vienna Symphony Orchestra.

This list is only the tip of the iceberg for cellist excellence. If you want to read about some of the violinist GOATs, check this out.