Published by StringOvation Team on May 17, 2018 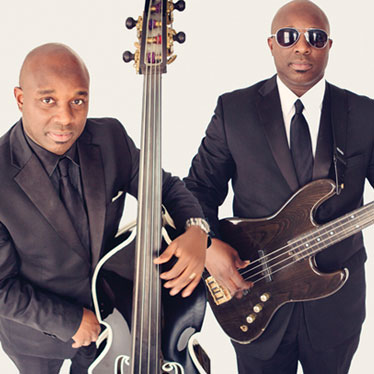 Like many artists (cellist Yo Yo Ma, bassist Giovanni Bottessini, violinist Janine Jansen) bassist Charnett Moffett was born into a musical family. His father, Charles Moffett, played drums for Ornette Coleman - a jazz legend. In fact, Charnett's name is a hybridized version of both his father's and Ornette's.

Charnett (aka Net Man) has enjoyed a successful - and varied - 35-year (and counting) music career - including playing bass for renowned groups such as the Wynton Marsalis Quintet and all manor of old-school and contemporary jazz "royalty," (think Art Blakey, Dizzy Gillespie, Stanley Jordan, Harry Connick Jr.).

In his own right, Charles Moffett is known for dynamic versatility and innovative approaches to playing bass. His musical philosophy is aptly captured in a quote from his Motéma bio:

"We have no choice but to continue to move forward...You have your history, but time only goes one way. It never goes back. That’s something that’s beyond our control, so we have to be in the moment of where we are."

While the majority of his career has been centered within the jazz genre - including pop and funk - Moffett's musical education is firmly rooted in the classical fundamentals instilled in him via his attendance at a performing arts school and a short stint at The Julliard School of Music. Currently, Moffett tours with his own NeTTWork Trio. He's released fourteen albums as the leader and nine albums as a sideman.

Let's spend a little inter"net" time, learning more about one of the most talented bass players of our era.

Moffett has been interviewed hundreds of times over the years, and his frank, approachable, and very honest responses and insights are yet another reason why he's considered (as Frank A. Matzner puts it) an extraordinary artist among extraordinary musicians. When it comes to music, Moffett has a dedicated, inward, and spiritual connection to the process, which goes well beyond the realm of black-and-white musical theory and technique.

Being a dedicated musician is like being an athlete

In addition to an honest and sincere love of music, Charnett Moffett maintains humility. Rather than consider himself a "finished" artist, he admits he's still learning. Moffett believes, "...you’re only as good as your last show. So you’re only as good as how much time you’ve put in recently on the instrument." He likens the life of a musician to that of an athlete, saying, "You have to take care of yourself, train properly, and prepare."

Legendary musicians get nervous around their own legends

Contrary to what you might think, even musicians the likes of the Net Man get nervous when performing, especially when they're asked to play with or accompany their own musical heroes. That has happened many times over during Moffett's esteemed career, but even now he becomes nervous when invited to play with musicians whom he admires.

One example took place around the year 2000, several decades into his own successful career. Moffett had the opportunity to play with legendary pianist, McCoy Tyner. Moffett once remarked he was originally nervous at the idea of accompanying Tyner. The surprised interviewer asked how someone as well-respected as Moffett could be nervous playing with anyone? Moffett remarked:

"How could you not be? You want to do your best and you have to have enough confidence to be up there playing in the first place, but by the same token you have to keep it all within balance...and understand, 'let me try to learn and grow from this experience,' so I can become a better musician."

That's an inspiring perspective coming from a musician as gifted and successful as Charnett Moffett. His words are worth memorizing as inspiration to keep your own musical practice - and career - focused, in balance, and aligned with the concept that all instrumentalists should strive to learn and grow in our musicianship.