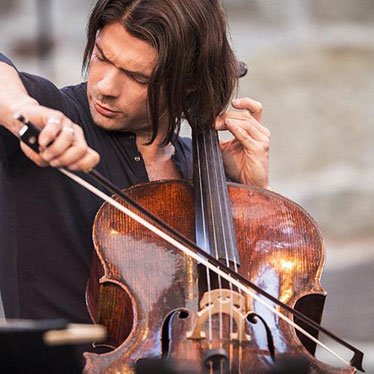 French cellist Gautier Capuçon has been described as imbuing “the cello’s lushly lyrical lines with myriad shadings” and his playing as “genuinely heartfelt and easily captivating the audience.”

He’s kind of a big deal.

Classical music doesn’t do the advanced stats thing (not yet, anyway), but there’s plenty of stats showing off Capuçon’s talent and experience:

In truth, these are just a sampling of Capuçon’s acclaim.

Capuçon was born in 1981 in Chambéry, France. He began learning the cello at just four-and-half-year’s of age. He also plays the piano, which he started learning around age seven. Although his piano playing is mostly a personal, rather than professional, pursuit where he is partial to jazz piano.

He started his formal music education at the Ecole Nationale de Musique de Chambéry, earning first prizes in cello and in piano. From there, he moved on to the Conservatoire National Supérieur in Paris, studying with Philippe Muller and Annie Cochet-Zakine. Again, he was graduated with the first prize in cello, but also the first prize in chamber music.

While he was already performing professionally, Capuçon continued his studies with Heinrich Schiff. Due to both their busy schedules, they would meet for five days a month in Vienna, wherein Schiff would provide intensive day-long instruction.

In 2014, Capuçon founded his Classe d’Excellence de Violoncelle to mentor and support a select group of six young cellists in their own musical and professional development. The program is backed by the Louis Vuitton Foundation and is normally held in the Foundation’s impressive building. His goal in starting the intensive learning experience for remarkably talented young cellists was to provide them the experience and confidence needed to transition into full professional musicians.

The small group of musicians selected to participate in each year’s program are chosen based on their past experience and live audition. The selected participate in coaching sessions lead by Capuçon, as well as other experts he invites to address the group. Sessions range from artistic expression to stress management and handling life on the road.

Master classes are open to the public, as well as concerts by the participants, are part of the Classe d’Excellence experience. The current schedule of Classe d’Excellence events ends with the six cellists performing a work for seven cellos commissioned by the Louis Vuitton Foundation just for the event. You can guess who the seventh cellist performing will be.

Capuçon is one musician to keep your eye on!