Published by StringOvation Team on May 05, 2017 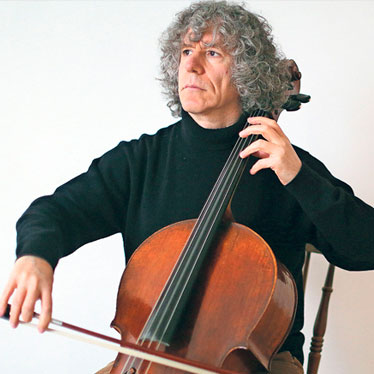 Steven Isserlis is considered Britain's greatest cellist. He's certainly one of the world's best. One of his most recent highlights is his performance of Bach's complete Cello Suites, live and from memory at London's Wigmore Hall in 2016.  According to Isserlis, the planned performance terrified him.

This from the cellist who'd won Gramophone's Instrumental Disc of the Year in 2008 for his recording of the same suites, which remains one of the most highly regarded recordings of the popular works.

Of course, there's much more to Isserlis than his love and terror of Bach. Here's more:

Isserlis was born into a musical family. Indeed, he is a distant relative of Felix Mendelssohn. His great-grandfather, Russian pianist and composer Julius Isserlis, was one of only 12 musicians Vladimir Lenin, the first leader of the USSR in the wake of the Russian Revolution, permitted to leave the country to promote Russian culture abroad.

Both his parents and his siblings are also very involved in music. Isserlis recounts one of his earliest memories is of his father taking him to the Royal Festival Hall in London to hear Mstislav Rostropovich. Isserlis was greatly affected by the Rostropovich's cello performance, which he described as a "bullfighter taming a dangerous beast."

He studied music at the City of London School as a child and moved to Scotland when he was 14 to study with Jane Cowan. He graduated from Oberlin Conservatory of Music in 1980.

The celebrated cellist had a slow start to his career. It wasn't until his performance in 1989 of John Tavener's The Protecting Veil, that Isserlis started to receive popular and critical acclaim. Isserlis was quite the architect of his own success. He commissioned Tavener to compose a short piece he could perform. This short commission was the nucleus of the longer piece Isserlis performed in 1989.

Working with contemporary composers is one of Isserlis' musical passions. Several contemporary composers, including Carl Vine and Wolfgang Rihm, and Douglas Weiland, in addition to Tavener, have composed works specifically for Isserlis. However, he also has a love for historically authentic performances. He has performed classical pieces accompanied by historically accurate instruments, such as performing Dvorak's Cello Concerto with Robert Levin playing the fortepiano.

Another favorite of this soloist and chamber musician is reviving neglecting works. Isserlis has organized many festivals, which often intersperse a composer's most famous works with forgotten ones, such as he did in a concert series entitled "Sleeping Beauties" (2000) with the London Philharmonic Orchestra. He's also organized festivals focusing on Schumann, Mendelssohn, and Brahms, as well as lesser-known composers such as Taneyev.

He is known for his extraordinary phrasing, as well as the unique sound of his instruments. His sound is attributed, in part, to his use of gut strings. He usually performs with the Marquis de Corberon (Nelsova) Stradivarius of 1726. He also sometimes plays on the De Munck Stradivarius of 1730 and is partial owner of a Montagnana cello (1740) and Guadagninin cello (1745).

Isserlis' pre-performance ritual is fixed. He rehearses in the morning, eats a huge lunch, and then relaxes by listening to The Beatles.

In 1989, Isserlis was awarded CBE (Commander of the Order of the British Empire), a high honor given to those who make an innovative contribution to the nation.

Interests Beyond Music (Sort of)

Isserlis doesn't just perform music. He writes about it as well, mostly for children. He's published two children's books about famous composers: Why Beethoven Threw the Stew and Why Handel Waggled his Wig. He's also written children's stories about music in collaboration with composer Anne Dudley: Goldiepegs and the Three Cellos, Cindercella, and Little Red Violin (the wolf is a cello in his version of the fairytale).

From Beatles to fairy tales to 18th century Italian cellos – Isserlis brings his distinctive passions and perspectives to all his performances and projects.