Published by StringOvation Team on November 23, 2018 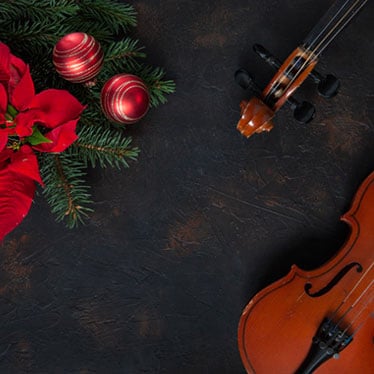 Let’s face it, after years of playing the violin or viola you get tired of the same ol’ holiday tunes. But, the fact of the matter is – holiday songs are typically what people want to hear and sing this time of year.

Visit our blog, Top 10 Modern Holiday Songs for Strings, if you’d like to take a modern approach to traditional oldies. Otherwise, here are some compositions for violin and viola (and a few that honor the cello and bass as well) that may be more inspirational to you than the pieces you’re used to playing.

Vivaldi’s “Winter” from The Four Seasons

In honor of the holiday (aka, “winter”) season, why not begin working on “Winter,” a movement from one of Antonio Vivaldi’s most famous compositions. You can print this version from musescore.com that is a violin and viola duet, but is also scored to accommodate the cello and bass. It also includes exceptional piano and drum set accompaniment, so consider getting your ensemble together, and start making some impressive music.

The tune, It’s a Marshmallow World, is actually a jazz standard and has been performed by all of the greats – most notably, Dean Martin. That being said, it’s not as well-known as many of the other holiday songs out there, and these versions arranged by Peter De Rose, for Viola and Violin, are great for beginners.

Grab your favorite choir member and print the lyrics – and you’ll have a busking act ready to go! Have other string players you’d like to include? Use the musicnotes.com site’s hyperlink to “find other arrangements of this song.”

The group Boyz II Men were a hot item back in the 1990s, and this holiday song was a big hit. It strikes a chord with anyone who’s ever felt the angst of a broken heart during the holidays. Contrary to popular belief, the holiday season isn’t bright and cheery for everyone, and this song pays homage to that.

Here’s an arrangement of Cold December Nights for viola (and one for violin). You can Click Here to listen to the original version.

Dennis Riley (1943 – 1999) was a graduate student of music, a prolific composer and he taught in the music programs at both California State University Fresno and Columbia University. In the 1980s he was among the first composers who advocated for the computer’s role in notating music. As a result, he spent the last half of his career preparing computer scores for other composers.

His original work, Winter Music, was composed for violin and viola, and is a beautiful, three movement work that is meant to be played continuously, without any pause between movements.

Here’s another lesser-known “traditional” holiday song that isn’t as overplayed as the ones we’re used to hearing at the mall. The White World of Winter is an upbeat love song. You can Click Here to print the viola solo, and here for the violin.

If you’re not familiar with the piece, here’s the Lead Sheet for you, which includes the guitar tab and lyrics. Grab some shakers, tambourines, and a triangle and have some friends improvise fun musical accents.

Shake Me I Rattle…, Marion Worth

During the 1950s, families gathered around the television sets to watch The Lawrence Welk Show, where The Lennon Sisters were a staple act. Their arrangement of Shake Me I Rattle (Squeeze Me I Cry) was a huge success. The song tells a sweet story about a doll in a shop window that’s purchased as a holiday gift for a girl who longs to own her.

You’ll bring a tear to the eye of your grandparents and their peers, sure to have seen the Lennon Sisters at one time or another, when you master this version arranged for the viola.

What Are You Doing New Year’s Eve? Frank Loesser

Isn’t it time that New Year’s Eve got a bit of attention? We thought so too. Thus, we’re including this song, What Are You Doing New Year’s Eve? (you can Click Here for the Violin version), composed by Frank Loesser.

Here’s our advice: take it, learn it, and get some friends together to improvise and give it some personalized character. Need a little inspiration? Watch and listen to this adorable YouTube version, played on ukulele and guitar, featuring Zooey Deschanel and Joseph Gordon-Levitt.

Don’t feel like you have to get stuck in the holiday music rut. Use the internet and start searching for cool violin and viola songs that you can individualize and make your own. The StringOvation blog has multiple posts for just that purpose, like our Top 10 Holiday Songs for the Violin, or, Great String Music for Holiday Parades.