The Emergence Of The Guitar In Orchestral Compositions

Published by StringOvation Team on December 21, 2017 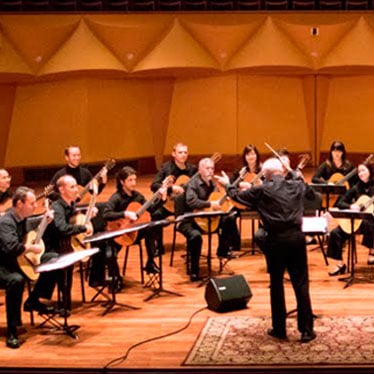 Perhaps one of the most shocking things music students learn is that Mozart's once-newfangled-now-classical music was considered as offensive to 18th-century elders as today's hip hop and rap are to modern day grandparents. Music is a living, breathing form of art and it has always existed within the realm of change, innovation and evolution. For this reason, the guitar is continually emerging as both a supporting and starring performer in orchestral compositions.

Let's look at the history of the guitar to watch its impressive progression from minstrel accompaniment to orchestral star.

Guitars Have Evolved Over 4 Millennia

The roots of the modern guitar began more than 4,000 years ago. However, the guitar as we know it today:

...a stringed instrument that traditionally has 6 strings (although there are such things as 7, 8 and 12 string guitars) and can be plucked or strummed. Guitars can be acoustic, semi-acoustic or electric. Acoustics and semi-acoustics consist of a hollow body. Semi-acoustics and electrics are played with amplifiers via pickups..."

came into being more around the time of the Renaissance, although they were often made in varying sizes, shapes and with differing numbers of strings. By the 18th-century, Italian guitars began boasting six-strings, and this rapidly became the norm for the rest of Europe as well the new world.

It's not easy to write classical guitar music

Here's an interesting tid-bit for you guitarists out there: unlike other forms of music, it is very difficult to compose classical guitar music without being a proficient guitarist yourself, or without working in close collaboration with a proficient guitarist. Perhaps this is why the guitar remained more of a solo - or supporting - instrument for much of it's initial existence as a classical instrument.

Since musical composition for the guitar required musicianship, most guitar music written during the Renaissance, Baroque and Romantic eras are solo pieces, composed by established, proficient luteists/guitarists of the time. Some of the most famous compositions and composers from these eras are:

Then, during the 19th century, classical guitar music exploded and the field experienced what is referred to as "The Golden Age." We recommend visiting Wikidpedia's Classical Guitar Repertoire page to review extensive lists of the most famous composers of classical guitar music during this and succeeding periods, including the Modern Era.

So Where Are All the Orchestral Pieces for Guitar?

You may have noticed there is a lack of orchestral pieces in this list, and there's a good reason for that. Just as the sounds of more delicate string instruments can be absorbed - and completely eradicated - by a brass band, so too are the gentle sounds of the guitar completely taken over by a robust orchestra. Thus, guitars were not really considered for orchestral compositions or "concertos" all that often.

That being said, there are some concertos that are both written - and managing to survive the test of time. These include pieces such as:

Now, in the Modern and Post-Modern musical eras, more and more guitar composers are creating orchestral pieces that include guitar. This ability is enhanced by the guitar's ability to be plugged in electrically and/or amplified by a sound system - allowing it to be featured as both a solo instrument, as well as one that is played along with the orchestra.

Also, the advent of pops orchestras, which feature music that is considered "light classical," or jazz - and contemporary music pieces, also include guitarists as a part of their ensembles.

Guitarists' interest in playing together as a group has also spawned the advent of guitar orchestras, which exist all over the world. Some of the most famous, guitar-only orchestras include The Barcelona Guitar Orchestra, the New York City Guitar Orchestra and the Cambridge Guitar Orchestra. These orchestras make it possible for classical guitarists to enjoy their craft with a group of their peers, playing the music they love.

Having a difficult time convincing your parents to let you play the guitar? Introduce them to the beautiful world of classical guitar and orchestral music, and they'll gain a new appreciation for your instrument of choice.

Above Photo of the Orange County Guitar Orchestra, courtesy of www.ocgo.org