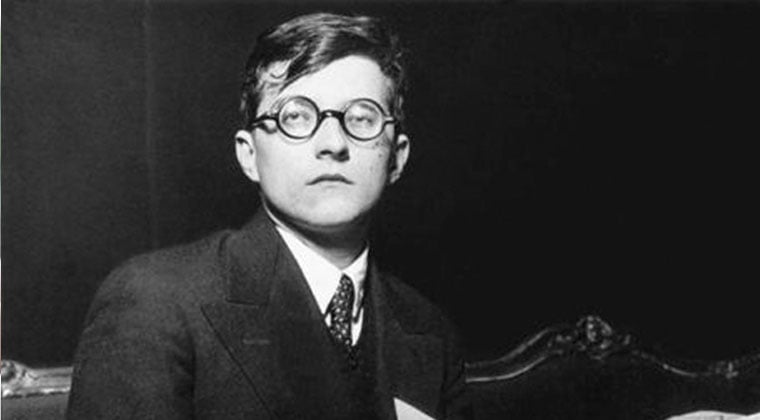 In our modern global society, with the ability we have to exercise freedoms that were so dearly fought for, it can be easy to forget that musicians weren’t always at liberty to create whatever they wished. One such artist, Dmitri Shostakovich, lived during turbulent times, under the dictates of brutal censorship for a large portion of his career. Although he figures as one of the most prominent musicians of the 20th century, one wonders what he could have accomplished without having lived his life under the constraints of a communist dictatorship.

Having written 15 symphonies, numerous works for the piano (both preludes and fugues), string quartets, operas, and ballets, this incredible musician also created many film scores and concertos, leaving behind a legacy of brilliance that has ensured his prominent place in music history, despite the challenges he faced. And although most string instrument students are familiar with his Symphony No. 1 and Waltz No. 2, made famous by its inclusion in the soundtrack to Stanley Kubrick’s “Eyes Wide Shut,” there are a number of interesting facts about Dmitri Shostakovich that are unknown to many musicians. The life of this remarkable composer of the Leningrad Symphony was filled with amazing successes and frightening falls from grace.

Born September 26, 1906 in St. Petersburg, Russia, he lived under the rule of Stalin from 1924 to 1953. The following amazing facts about Shostakovich have been gleaned from an article in Russia Behind the Headlines, written by Anna Popova, the Encyclopedia Britannica, and an extract from Shostakovich and Stalin (Little, Brown).

Shostakovich originally planned to become a pianist. He wanted to both write and perform music, intending to follow the path hewn by Rachmaninoff.

He was a noted film accompanist. After WWI, he enrolled in the Petrograd Conservatory, but continued to attend concerts every day. In 1923 he earned the credentials to become a pianist for silent movies. At that time, movies had no sound, and theaters would employ a pianist to play the music for the show. During this time, Shostakovich learned to improvise, develop musical fragments, and assign certain melodies for each character in the film.

His Symphony No. 1 was his graduation piece. At the age of 19, he wrote this lasting composition, which was eventually performed abroad in 1927.

At age 26, Dmitri Shostakovich wrote Lady MacBeth of the Mtsensk District. It featured a risky plot and unconventional music that was received with stellar acclaim. However, after two years of success, Stalin himself attended the performance, and was apparently much offended. The following day, the newspaper of the state, Pravda, highly condemned the piece, stating that it “corrupted the Soviet spirit.” Shostakovich was reviled in every publication for the work, and the opera disappeared from the stage.

It’s reported that Shostakovich lived in fear of immediate arrest, and that he actually slept outside his apartment to spare his family the site of his apprehension.

Despite his fall from grace, Shostakovich went on to receive a number of international awards and accolades in the Soviet Union, including:

His Symphony No. 7 was performed in Leningrad, while it was being besieged and bombarded. In fact, the musicians of the Philharmonic were living in dire conditions, but the performance was packed, and later heard by Britain and the United States, having been recorded on microfilm.

After the death of Stalin, Shostakovich’s musical career was less stifled, and he was able to compose without official interference. The only exception was his Symphony No. 13, which was suppressed after its first performance.

During his various international tours, visiting throughout Europe and the United States, he received an honorary Doctorate of Music from the University of Oxford.

Dmitri Shostakovich was remarkable not only for his inspired musical genius, but also for the fact that he lived and worked under the constraints of the stringent, government-imposed standards of what was acceptable Soviet art. His ability to overcome those challenges and forge a career among those dictates makes him an exceptionable artist in his own right, and reminds us not to take for granted the freedoms that we now enjoy.