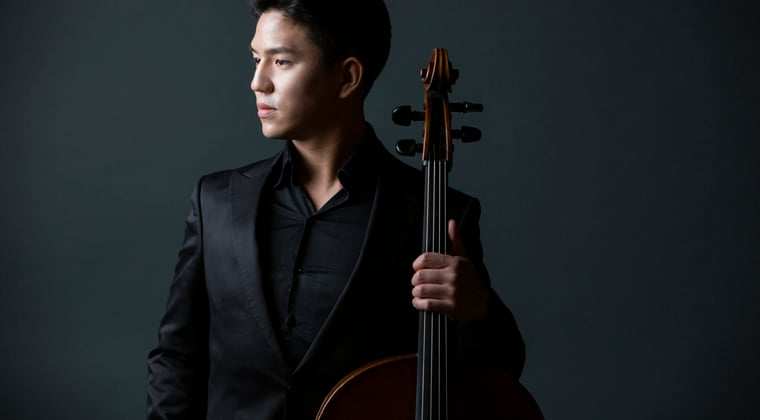 Cellist Sol Daniel Kim’s most direct connection to musicianship – genetics – isn’t uncommon. Many of the string musicians we profile have accomplished musicians as parents. In Kim’s case, however, his mother was a famous opera singer, and we can’t help but wonder if this is the reason his cello music seems to sing with a deeper and more expressive voice than other young, professional cellists.

We’re so enthusiastic about his ability to express nuanced phrases and tones that we asked him to test the new Versum Solo Set from Thomastik-Infeld. Click Here to watch the session and listen to his feedback about Versum’s Solo Set (spoiler alert: among other positive comments, Kim says he loves the “absolutely amazing harmony of all four strings”).

Life as an Up and Coming Cellist

Sol Daniel Kim is Korean, but he was born in Vienna in 1990. How auspicious for a rising music star, right?

He started playing the cello when he was 6-years old. In his online video, “Get to Know Sol Daniel Kim,” Sol Daniel remembers, “I liked to play the cello from the beginning…but, of course, it was frustrating because there was no sound coming out of it. It was just scratching and noises…I played it with a child’s heart and mind; I just did it for fun, and at some point I became more serious.”

It was three years later, at age nine, when he became notably more serious, earning admission to the University of Performing Arts in Vienna. There, Sol Daniel studied under famous cellist and conductor, Heinrich Schiff (who taught other renowned cellists, including Rudi Spring, Gautier Capuçon, Richard Harwood and Natalie Clein).

In the past two decades, Sol Daniel Kim has celebrated many accolades and professional milestones. From 2004 (age 14) through 2010, he studied and worked via a scholarship from the Rostropovich Cello Foundation of the Kronberg Academy. He performed in some of the world’s most famous concert halls such as the Stefaniensaal of the Musikverein Graz, and made his solo debut in 2009 at Schubert Hall of the Vienna Konzerthaus.

He has also studied under Jens Peter Maintz (Master) and Danjulo Ishizaka (Konzertexamen). From 2016 through 2017, Sol Daniel was taught by Gautier Capuçon , as part of the “Classe d'excellence de violoncelle,” – resulting in a duet performance of Luigi Boccherini’s Sonata G17 in C major for the Louis Vuitton Foundation.

This memorable duet with his renowned teacher-turned-partner proves that by practicing diligently and with “the heart of a child,” beginning cellists’ bowing can evolve from scratchy and soundless, to rich, vibrant and expressive.

After Sol Daniel Kim performed Dvorák’s famous cello concerto in the Stefaniensaal of the Musikverein Graz at the Styriarte Festival in Austria, a critic wrote that Kim paid homage to Dvorák’s intentions, “…with romantic, but restrained mourning (love-theme in the Adagio) and also mastered the passages in the highest position and the most difficult double stops.“

Of course, expertise and technical prowess are necessary to accomplish difficult hand positions and double stops. But it also requires a musically intuitive heart and soul to energetically interpret a composer’s emotional journey to an audience – something that more naturally transpires via a combination of music and lyrics.

So, yes, Sol Daniel Kim’s abilities pay homage to his opera singing mother, Choon-Ae Kim – however, we can all agree he came into the world with pure, raw talent.

A composer who respects every genre and type of music

To date, Sol Daniel Kim boasts notable accolades and a roster of teachers any cellist would envy, but that’s not all. He is also a composer. Sol Daniel says composing deepens his connection to artistry and musicianship. He says, “As a musician, we have to respect every genre or every type of music that is out there today.”

He’s a big believer in attending live performances, “…if I see an artist and am impressed by his work, the immediate thing that pops into my head is, ‘I want to see him live, I want to see his performance with my own eyes.’” Sol Daniel believes the need and desire to see artists perform live is a big part of the human experience and that pull can be used to entice audiences back to the concert hall.

Celebrate and support this goal. Bookmark Sol Daniel Kim’s concert schedule for a chance to fill a seat when he’s performing in a venue near you. You can also follow him on Facebook and Instagram, to learn more about what this rising cello star is up to.