Published by StringOvation Team on October 11, 2016 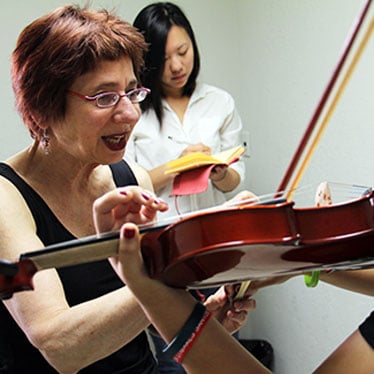 Have you ever wondered what makes a musician sound so great? Or, have you ever considered how someone's musical abilities were nurtured and formed, so as to lead to such an exceptional string performance? Violin students and parents know that it takes dedicated training to reach a level of excellence that is worthy of praise. And, when you research the fundamental principles behind the techniques, you’ll know that building a healthy foundation is imperative to success.

Mimi Zweig, a Professor of Violin at the Indiana University Jacobs School of Music, is well known for not only her professional performances, but also her development of pre-college string programs. Since 1972, her unique method of teaching has enabled many of her students to become members of leading orchestras and string quartets across the world. Learning about this remarkable pedagogue can help inspire your own training. In this piece, we’ll examine the life, performance, and teaching style of master violinist Mimi Zweig.

According to an interview for the String Academy of Wisconsin, Mimi Zweig began her violin training at the age of eight. And although she also trained on the piano, viola, and the bassoon (although she quit bassoon after three months because it was too heavy to carry to school), like everyone, she still required the technical foundation and physical understanding to become proficient. A truth that she now instills in her own students.

Her first inspirational teacher was Louis Krasner (Syracuse University) who made her aware of the beauty of the violin and the possibilities of playing artistically. Later, Raphael Bronstein (Manhattan School of Music) introduced her to the wide range of violin repertoire, and Samuel Kissel (a student of Dounis) gave her the “vocabulary to understand how to play the violin.” However, she also credits her students with helping to teach her, saying that “When you teach, you learn from your students.”

In 1972, she began teaching children as an assistant teacher with Nancy Kredel at the North Carolina School of the Arts and assisted in developing a string program for children in the Winston-Salem school system. Four years later, she created a program for children in Pittsburgh before moving to Bloomington String Academy. Her first vision for the String Academy of Wisconsin (and essentially, her own teaching style) was acquired after attending a concert presented by Betty Hague, and it was strengthened as she continued to observe the children performing together and performing solos within the group.

The academy's model of instruction is based on the fundamental principles of violin teaching designed by Zweig, and which include a strong element of the Suzuki method. In fact, she contributes her teaching system to the influence of the Suzuki method and the method developed by Paul Rolland. Using a non-judgmental environment, strong techniques that focus on fluid motion, and physical freedom she orchestrates and provides each student with the confidence they need to excel in their musical abilities. One of her former students is virtuoso Joshua Bell.

Zweig incorporates Suzuki's repertoire, along with heavy parental involvement and group instruction as the fundamental curriculum in the string academy model. The philosophy of encouraging children to strive to meet their potential, and encouraging strong parental involvement has given Zweig's students the ability to acquire valuable insight that is able to enhance their future endeavors.

In an effort to spread her successful instruction, she has developed Mimi Zweig String Pedagogy online. The website is designed to help parents and students find qualified violin instructors in their area, who have been certified with Zweig's method. It also includes purchasing links so that you can get personal instruction with either video disks on online access.

The initial years of instrument training are extremely important for developing concentration skills and the love of music. And, knowing that truth, Mimi Zweig has developed a method that works. By combining a strong belief in her student’s abilities with an open-minded environment that enables her students to develop their abilities, musical sensitivity, and the freedom of expression, she has created a lasting legacy.