Published by StringOvation Team on June 27, 2017 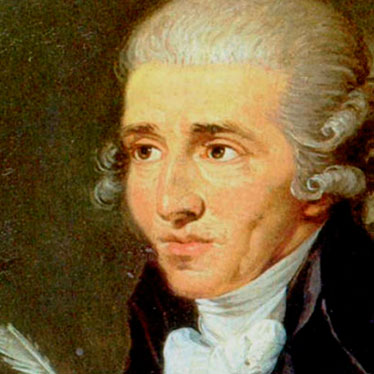 Sometimes called the “Father of Symphony” or the “Father of the String Quartet,” Franz Joseph Haydn’s pivotal role in birthing the Classical Era is unquestioned. His influence on other masters like Beethoven and Mozart is common knowledge. You may think you know Haydn.

Haydn was no choirboy

Well, actually he was. Born in a small Austrian village of Roharu on March 31, 1732, young Haydn showed musical talent early. His parents sent him, at age five, to live with the choirmaster in Hainburg, who also happened to be a relative. He was noticed by the director of the choir at St. Stephan’s Cathedral in Vienna, and joined that choir when he was eight years old. There was talk of performing a delicate operation on Haydn so his voice wouldn’t break when puberty hit.  His father nipped such talk in the bud.

Alas, at age 16 Haydn’s voice did break. The Empress was no longer impressed by him and Haydn was kicked out of the choir. He went down swinging. He cut off another boy’s ponytail in anger and was publicly caned for it.

While cutting off the ponytail may have been a mean-spirited prank, Haydn was well known throughout his life for being a good jokester. His String Quartet in E-flat major, Op. 33 is subtitled The Joke, because he inserted numerous false endings within each movement to catch audiences off-guard. His Symphony No. 94 is subtitled the Surprise. He had fun with the audience in this symphony by injecting sudden fortissimo chords into quiet passages to wake-up the snorers.

During his choirboy years, Haydn learned to play several instruments. Upon leaving the choir, he first supported himself (badly) by teaching and playing violin. And by “playing violin” we mean he was a street busker playing for spare change. Everyone starts somewhere.

When he was 20 years old, he became an apprentice to Italian composer Nicola Porpora. Haydn had no formal training as a composer, but learned the fundamentals from Porpora. He also taught himself by studying prominent composers. He identified Carl Philipp Emanuel Bach as a particular influence. Haydn also said practicing the exercises from musical theory manuals he studied were a major part of his self-education. So don’t short-change your practices!

His big break came in 1758, after he started getting the attention of Viennese noble families. He was appointed the musical director and composer for the Count Ferdinand Maximilian von Morzin. He was responsible for an orchestra with around 16 musicians. A short three years later, Haydn really hit the big time when he was offered a job by Prince Paul Anton of the powerful Esterházy family. His first job with them was as Vice-Kappelmeister (court musician) and was promoted to full Kappelmeister in 1766.

He worked for the Esterházys for the next 30 years, living in their summer palace. Haydn was fairly isolated from other composers and was, as he put it “forced to become original.”

One tally puts the total of Haydn’s works at:

By one estimate, he composed over 340 hours of music, more than Mozart, Beethoven, Handel or Bach. He is credited with inventing the string quartet as we know it, and with being the main architect of the classical formats. He taught future great composers – Beethoven was his most prized pupil.

Haydn left Esterházy’s employ in 1791, and was quickly invited to London to conduct new symphonies with German violinist Johan Peter Salomon performing. He composed some of his best loved works while in London, including the Surprise Symphony. He was moved by the patriotism of the British national anthem, which inspired him to compose his own patriot work. The result was a melody he wrote for the poem, “Gott erhalte Franz den Kaiser” (“God Save Emperor Franz”) written by Lorenz Leopold. This hymn was developed into his String Quartet No. 62, Op.76 No.3 (Kaiser Quartet) and became the basis for both the German and Austrian national anthems.

He wasn’t formally a teacher of Mozart, but the two had a close relationship and high mutual regard. Haydn wasn’t an artist who struggled in obscurity. He was famous and revered during his lifetime, widely called the greatest living composer at the time. He would say that honor belonged to Mozart. Mozart’s Requiem was played at Haydn’s funeral when he died in 1809.